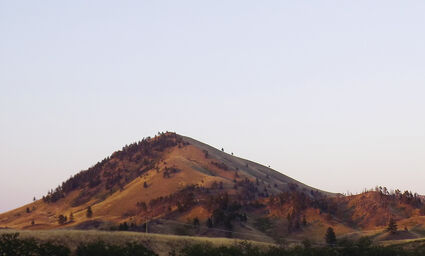 The setting sun shines on Mount Otis in Beaver Creek Park Saturday. The Bear Paw Mountains saw a heat wave Saturday, as most of the region did, with a National Weather Service station on Rocky Boy's Indian Reservation near Mount Otis recording a high Saturday of 100 degrees, beating the previous record of 95 degrees set in 2013. The heat, with likely record-breaking highs, is expected to continue today but the temperatures are expected to cool off starting Thursday.

The sweltering heat the region has been experiencing is expected to continue today, with record-breaking highs predicted and a Red Flag fire advisory and heat warnings in effect, but cooler temperatures are expected starting Thursday.

Big Sandy was forecast to hit 103 degrees, with Hays and Harlem expected to reach 102, Chinook 100 and the Chester area the "cool" spot of the region with 97 degrees.

The high temperatures, a...