Stays at 7,225 acres through Tuesday night 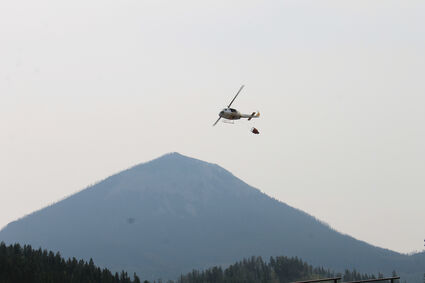 A helicopter flies through hazy air Tuesday in front of Mount Baldy toward East Fork Reservoir to pick up more water to help fight the Eagle Creek Fire.

Editor’s note: This version corrects the size of the fire in the subheadline.

Work on the Eagle Creek Fire continues with the firefighting perimeter continuing to grow.

The perimeter was estimated at 40 percent Sunday and the Inciweb reporting site Tuesday reported the perimeter 60 percent contained.

The site has reported the size of the fire at 7,225 acres since Sunday evening.

Incident Commander Robert Smith said Tuesday the land crews are primarily working on the edges to establish a perimeter with the focus on the northwest edge and also on the eastern edge.