Lights can't hold down the Bulldogs 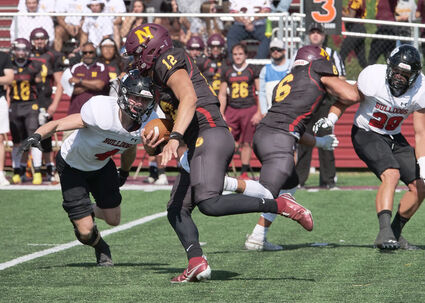 MSU-N quarterback Brenden Medina runs the ball against Montana Western at Tilleman Field on Saturday. The Lights lost, 35-6, to the Bulldogs to drop to 0-3 on the season.

When Jerome Souers took over as the head coach for the Montana State University-Northern football team, he knew this season was going to be about growth for the Lights. Just this Saturday at Tilleman Field, the Lights suffered a 35-6 loss to Montana Western, but Souers believes they are moving in the right direction despite the loss.

"Our execution is still a long way from where it needs to be but I'm proud of the improvements that they made and how they continue to work to develop those skills," Souers said. "We just have to be patient."

The Lights received the ball to start the game but went three and out on their first drive. The MSU-N defense responded by forcing the Bulldogs to go three and out on their opening drive. With the ball back, the Lights picked up a pair of first downs. The first came on a scramble by quarterback Brenden Medina and the second came on a defensive pass interference penalty.

But the drive came to an end at the Western 38-yard line. On fourth and three, Medina's pass over the middle was intercepted by Western linebacker Braden Smith. After Smith returned the pick into Northern territory, the Bulldogs drove down to the 23-yard line. But after a third down stop, John Mears' 40-yard field goal attempt went wide left.

After another three and out by the Lights, the Bulldogs put together another drive. A pair of runs by running back Reese Neville and then a first-down run by quarterback Jon Jund got the Bulldogs into Northern territory. But at the MSU-N 30-yard line, linebacker Dylan Wampler sacked Jund and stripped him of the ball, which Lucas Thacker recovered to give it back to the offense.

"Coach (Joe) O'Brien and Coach (Brian) Smith have been doing a great job with our defensive guys and we're getting better," Souers said about the defense.

But the Lights could not do anything with the turnover. On fourth and two at the Western 48-yard line, Mason Dionne's run fell short of the first-down marker. With the good field position, it took little time for Western to get down to the Northern 30-yard line. On third and one, Neville received the handoff and ran it 30 yards for the touchdown to give Western a 7-0 lead with 12:26 left in the first half.

After another Lights punt, the Bulldogs put together another drive. Jund got the drive going with a 35-yard strike to Dylan Shipley down the left sideline to make it first and goal at the ten-yard line. After two stops by the Lights, a defensive pass interference made it first and goal at the two-yard line. A few plays later on third and goal, Jund kept it himself for a one-yard run into the endzone to extend the lead to 14-0 with 7:43 left in the half.

The next drive for the Lights ended quickly with Medina's pass being intercepted by linebacker Kameron Rauser and returned to the MSU-N 21-yard line. Just three plays later, DJ Kirven ran the ball for a five-yard touchdown run to push the lead to 21-0 with 5:23 left in the half.

On the next Lights drive, Kaymen Cureton came in to play quarterback. A sack of Cureton on third down ended the drive and forced the Lights to once again punt. The Bulldogs again used their running game to move the ball down to the MSU-N 37-yard line. But on Neville's next carry, Dustin Long forced a fumble and Wampler recovered it for the Lights.

With little time left in the half, the Lights tried to put a drive together. Cureton used his scrambling ability to pick up some yards for the Lights. He also connected with tight end Levi Keltner for another first. But on third and eight at the Western 41-yard line, Cureton's pass was intercepted by Cody Whalen. The Bulldogs then kneeled to end the half.

On the opening drive of the second half, the Bulldogs again moved the ball down the field. But on fourth and five at the MSU-N 31-yard line, Jund's pass to Elijah Benedick fell incomplete. Yet again, the Lights did little on offense and punted on their first drive of the half. The Lights offense has struggled in their first three games of the year, but Souers expects to see improvement as they get more snaps together throughout the fall.

With good field position, the Bulldogs only needed 13 yards to get to the MSU-N 46-yard line. Jund then connected with Shipley deep down the left sideline for a 46-yard score to make it 28-0 with 5:42 left in the third quarter.

The rest of the game followed a similar pattern: the Lights would punt and the Bulldogs would drive down the field to milk the clock. The Bulldogs scored again with a nine-yard touchdown run from Kirven to make it 35-0 in the fourth quarter.

But luck finally turned the Lights way late in the ball game. After another long Western drive, the Bulldogs attempted a 36-yard field goal. But the snap was fumbled and Joshua Rose picked it up to return it all the way for the Lights' first touchdown of the day. The Bulldogs blocked the extra point, but the Lights had finally scored to make it, 35-6, with 7:28 left in the game.

The teams exchanged possessions over the last few minutes to run out the clock. It was the third straight loss to start the year for the Lights, all three coming by at least 28 points. While these tough losses could be discouraging, Souers is confident that his young players can weather the storm and continue improving.

"Our guys are staying focused. They know what they need to do and we're going to continue to do it and that's the plan," Souers said. "We need some time so as soon as that light comes on and they start to understand the whole concept of playing together on offense, defense and special teams, I think we'll have a better outcome."

The MSU-N football team will next play Rocky Mountain College in Billings on Sept. 24.