Buchanan campaigns in Havre for Congress during Festival Days 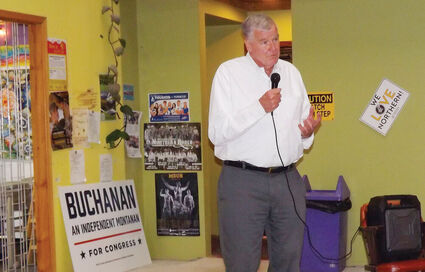 Independent candidate for Congress Gary Buchanan talks to about 20 people at a meet and greet Friday in the Atrium.

Gary Buchanan, an independent running for Congress in the newly formed eastern district of Montana, stopped in Havre this weekend to take part in the Festival Days Parade, hold a meet and greet and speak with the Havre Daily News about his candidacy.

Buchanan, the only candidate in the eastern congressional district who came to Festival Days, said while he is neither a Democrat nor a Republican, and his positions on issues often draw the ire of both sides, he decided to run due to his increasing dissatisfaction with Montana's current representative, Republican Matt Rosendale.