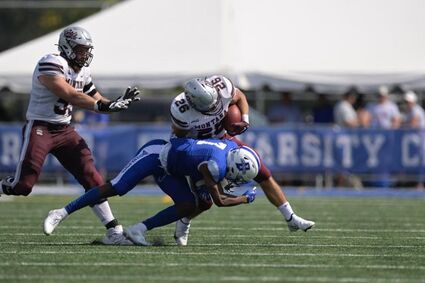 Montana's Nick Ostmo runs the ball against Indiana State this past weekend. The Griz defeated the Sycamores, 40-14, to improve to 3-0 on the season.

TERRE HAUTE, Ind. — The Montana Grizzlies shook off the rust after a long flight to the eastern time zone and earned a decisive 49-14 win over Indiana State on Saturday in the first-ever meeting between the two programs.

After the Sycamores came out firing early in the first quarter, Montana's defense settled in and put up yet another dominant performance, allowing ISU to score just one offensive touchdown and forcing the home team to punt on seven-straight drives through the second, third, and fourth quarters.