Blue Ponies head to Miles City to face the Cowboys 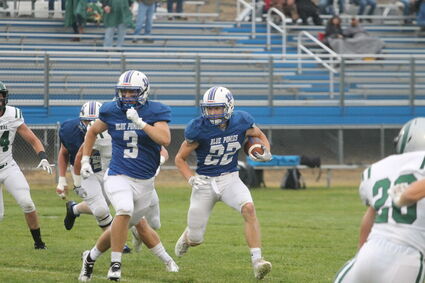 Havre's Jacob Herring runs the ball against Billings Central at Blue Pony Stadium last weekend. Tonight, the Blue Ponies will try to improve to a winning record as they head on the road to face Miles City

The Havre High football team is back on the road with a game against Miles City tonight. After losing to Billings Central at home last week, HHS head coach Jake Eldridge does not expect things to get easier for the Blue Ponies tonight.

"They're a well-coached football team. They're disciplined like every team that we seem to play in our league," Eldridge said. "We're going to have to overcome some adversity and a long road trip in a very competitive place and give ourselves a chance to go win a ballgame."

"We have to control the line of scrimmage and we have to stop the run," Eldridge said. "That'll give us an opportunity to hopefully be ahead of the chains and get us into some better down in distance situations on third downs where we can make them a little bit more one dimensional and hopefully get after the quarterback."

If the Ponies want to control the line of scrimmage, they will have to neutralize a strong offensive line for the Cowboys. Alex Donnelly returns to play tackle for the Cowboys after a first-team all-conference season last fall. In the interior, center Jackson Miller should be a problem after coming off an all-conference honorable mention season.

The Miles City defense will also be a stingy unit. In their three wins this fall, the Cowboys defense has allowed nine points a game. In the front seven, defensive end Holden Meged and outside linebacker Jay Plunhar will look to stop the run and create havoc in the backfield. In the secondary, Riley Cline will look to make plays at strong safety for the Cowboys.

The Ponies will need their offense to be at the top of its game to make headway against the Miles City defense. Quarterback Kale Van Campen has completed 49.1 percent of his passes for 458 yards, three touchdowns and one interception this season. After Van Campen got hurt last week, Ciaran Courtnage took snaps at quarterback and went 3-for-10 for 17 yards in the game.

Whoever gets snaps at quarterback this week, they will need to connect with their receivers. Tre Gary leads Havre receivers with 174 yards this fall. Hunter Sawdey has also been a playmaker for the Ponies this fall with 120 receiving yards and two touchdown catches this year.

The Ponies will also need to get their ground game going. Van Campen leads the team with 161 yards on a ground while also running for a touchdown this season. The next leading rusher for the Ponies is Brisbin Reiter who has 82 yards and a touchdown this fall.

"We just have to be consistent in what we're doing with our fundamentals, our techniques and our assignments," Eldridge said about the HHS offense. "Quarterbacks need to be better with being accurate with the football when they do throw, wide receivers got to be better with catching and getting yards after the catch and running backs got to be able to break tackles."

Havre enters the game with a 2-2 record this season. The Ponies have won both games on the road and have lost both their games at home this year. With their success on the road so far this year, it shows the Ponies are capable of keeping their composure in hostile environments.

"I think it's a credit to the kids. Just believing in each other and coming together as a team and having confidence in one another," Eldridge said. "They've gone into these two road games with the understanding that there's going to be adversity and they're going to have to overcome it. They've done that, stuck together and played really well on the road as a team."

Against a tough Miles City team tonight, the Ponies will get all they can handle. But Eldridge believes if they can weather the adversity and play with effort tonight, they should be able to compete with the Cowboys.

"There's always going to be mental mistakes but when you're playing fast, going a hundred miles per hour and doing these things, it's really going to give the kids a chance to be successful," Eldridge said. "We want kids to have high effort and to play with effort, to be mentally and physically tough. It's going to take all of those things for us."

The HHS football team will kick off against Miles City tonight at 6 p.m.