From the Fringe: If anyone deserves to be in the Hall of Fame, it's Gary Wagner 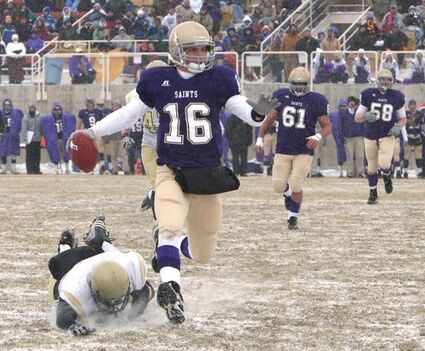 Former Havre High and Carroll College quarterback Gary Wagner will be inducted into the Carroll College Athletics Hall of Fame this weekend as he helped lead the Fighting Saints to a national championship in 2010.

When I think of the words: Hall of Fame, I simply equate the word earned to them. Yes, when someone, or a team, or whatever, is enshrined in any Hall of Fame, there’s no doubt they did things that earned them the recognition because no one takes a Hall of Fame lightly.

Former Havre High three-sport standout Gary Wagner no doubt is one of those people who has done things that have made him Hall of Fame worthy, and this year, that’s all come to fruition.

In the summer, Wagner was named a member of the Montana High School Association Athletics Hall of Fame Class of 2022, an incredible honor. That honor was because of Wagner’s long list of achievements as a Blue Pony, which included quarterbacking Havre High to the 2005 Class A state championship, as well as helping the Blue Pony tennis program to four consecutive state titles. Those team achievements coincided with Wagner racking up tons of accolades at HHS, including winning a pair of Class A doubles state championships with his partner

Marc Mariani, as well as smashing all kinds of passing records at HHS, while being named Class A All-State five times across three different sports.

Yes, with all those honors, Gary was more than deserving of a spot in the MHSA Hall of Fame.

But, he wasn’t done, and this weekend in Helena, Gary gets to be recognized for what he earned in college, too.

Wagner will actually twice be inducted into the Carroll College Athletics Hall of Fame this weekend, both as a national championship winning quarterback for the Fighting Saints, as well as a member of the 2009 NAIA semifinal Carroll football team.

Wagner was a 3-year starter at quarterback for the Saints. He led Carroll to a semifinal appearance in 2009, and an undefeated NAIA National Title in 2010. He was named offensive MVP of the National Championship game in 2010, Frontier Conference Co-Offensive Player of the Year, and was a finalist for the NAIA Player of the Year.

Just like what he accomplished at Havre High, Gary certainly earned his place in Carroll’s prestigious Hall of Fame.

Again, you have to earn your way into something like a Hall of Fame. You can have all the talent in the world, and there’s no question, Gary did, but, if you don’t do something with that talent, you’ll come up short.

And that’s one thing Gary didn’t do, he didn’t waste his talent, and because of that he rarely came up short.

During his days as a Blue Pony, I saw it first hand, as his tennis coach. I watched him all football season, and then, when it was my turn to coach him, I saw exactly how he maximized his talent. I had a front row seat to just how competitive and driven Gary was, two ingredients that usually lead to the top of careers like the one Wagner had both in high school and in college.

Yes, Gary was as competitive as they came, and that didn’t always make him easy to coach. He pushed and pulled and worked, and he demanded everyone around him to do the same. He did it in the huddle with the Blue Pony football teams of 2004 and 2005, two of the most successful teams we have had in the last three decades, he was a great leader on the basketball court, and he did the exact same thing with our ultra-successful tennis teams of those years. In other words, with Gary on your team, he did what all great athletes should do, he helped make everyone around him better, and like I said, I had a front row seat for that.

I also got to witness Gary make himself better. He was never satisfied with himself as an athlete, or as student. There’s a cliche in sports that’s pretty prevalent right now among youngsters, and it goes a little something like “put in work.”

Gary Wagner put in work. I saw it with my own two eyes. He threw a football in the offseason, he went to open gym hoops and he spent hours upon hours playing on the Bill Vaughey Memorial Tennis Courts, where he grew up just a mere two blocks away. In other words, Gary didn’t rest on his talent, he put the time in to maximize that talent.

That’s why Gary is going into the Carroll Hall of Fame, and why he’s already in the MHSA Hall of Fame — he did something with the immense talent and immense intelligence he was born with. He didn’t rest on it, he made the most out of it, and as a former coach of his, I’ll always respect and admire that.

And that’s why now, as someone who considers himself a closer friend of his, I’m so happy for him and so proud of him. So congrats on going into the Hall of Fame at Carroll College, Gary. Enjoy this special weekend, and just know, you earned it and you deserve it!