Four Blue Ponies tee it up one last time 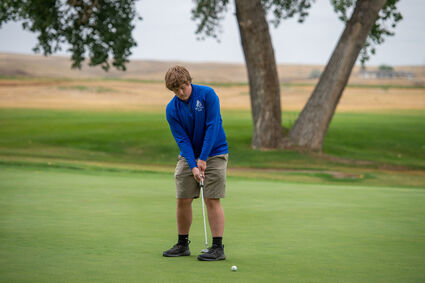 Reid Kato is one of four Havre High golfers to qualify for this week's Class A State Tournament in Hamilton. The event will feature 112 boys and girls from Class A in a 36-hole tournament played Friday and Saturday at the Hamilton Golf Club.

The high school golf season is the shortest of all sports seasons in Montana. That doesn't mean however, that the Havre High golfers headed to the season finale this weekend, haven't been grinding hard, day-after-day, week-after-week, to get to this moment.

And now the moment is upon four Blue Pony golfers as they head to Hamilton for the Class A state tournament, which runs Friday and Saturday at the tough, Hamilton Golf Club.

"These kids have truly earned this opportunity," HHS head coach George Ferguson said. "And I'm so excited for them. That's the beauty and som...