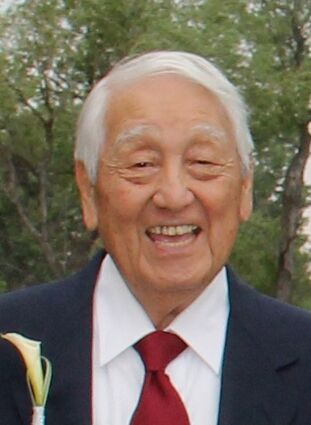 A funeral mass will be held at 10 a.m. Saturday, October 8th, at St. Jude's Catholic Church, followed by a graveside service. A luncheon will be held at the Duck Inn Vineyard Room after the service.

Please visit Mark's online memorial page at http://www.hollandbonine.com to send a card or leave a message of condolence for his family.

Mark was born in Havre, Montana, to Hachiemon and Yoshiko Kato February 21st, 1929. He attended Havre High School, starring for the Blue Ponies in football and basketball, graduating in 1947. Mark was selected to the first ever East-West Shrine game the summer of 1947.

Mark served in the Army from September 1948 until his honorable discharge December 1949.

In 1951, while attending his brother George and sister-in-law Arlene Kato's wedding, he met Johanna Weller. The two began a long-distance romance in 1955 and married September 3rd, 1956, in Bluffton, Minnesota. Mark and Johanna lived in Havre, Montana, and were blessed with four sons and three daughters from 1957 through 1970.

Mark worked as an employee at Havre Electric and later as an owner until it closed in 1983. Before retiring, he worked several years at Northern Montana College where he was known to be able to fix anything.

Mark was a faithful member of St. Jude's Catholic Church and a lifelong sports booster at Havre Central and Havre High School. In 2007, Mark was honored to be inducted into the Montana High School Association Hall of Fame. He and his wife, Johanna, traveled near and far to attend special activities and sporting events for their children and grandchildren. Mark helped with many household projects and was an enthusiastic participant in countless games.

After Mark entered the care center in 2015, he continued to bring cheer to those around him with his kind manner and sunny outlook. Until the end, he emphasized how proud he was of his family.

Mark was preceded in death by his wife, Johanna; parents, Hachiemon and Yoshiko; brothers Yatch, Harry, Ray, George, and Ted; and sisters Sue and Aki.

Memorial gifts may be made to St. Jude's Education Trust, St. Jude's Church or the Mark and Johanna Kato Scholarship endowment at Montana State University.