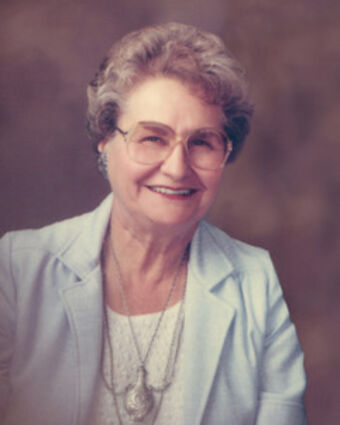 Frances Connor Minnick passed away September 29th while a resident of the Northern Montana Memory Care Center. She had just celebrated her 99th birthday, ending a full and community-filled life.

Fran was born September 14, 1923, in Goldstone, Montana, a small community 30 miles north of Rudyard. She was one of Robert and Lizzie Connor's two girls in a farming family of 11 children who relocated from Nebraska to homestead in Montana. The Connor family was a happy, fun-loving group. Gatherings with her brothers and sister were filled with laughter, telling farming and cowboy stories, and the party always included a card game, poker was their favorite. Fran loved her parents and visited them frequently when they moved to Havre from the farm. She had a special affection for her mother-in-law, Jean Minnick, who led her to know the Lord. Fran graduated from high school at Glendale, Oregon, where she lived temporarily with a brother helping with a new baby.

Fran met and married Jack in Havre in March of 1942, and they remained married until his death in 1995, celebrating 53 years together. While Jack worked on the railroad, Fran became a Stanley Home Products dealer selling her beauty and cleaning wares in homes from Chester to Fort Belknap. Everyone knew Fran the "Stanley Dealer." She loved that business and stayed with the company over 50 years. The party would include a hostess and neighbor ladies and there was a sales pitch for each wonderful product and her big, beautiful smile and friendly manner provided her great success and many, many friends. Even as she began to get forgetful, you could get her to talk about Stanley and she'd always tell you with emphasis "who wouldn't love a party!"

Another favorite pastime of Fran's was frequenting garage sales and buying interesting items which often ended up in her own garage sales. She loved a deal and was a happy buyer.

Jack and Fran were both involved with the VFW and the Eagles. Fran was a drill team member and held different offices for both organizations. Her greatest joy was helping with the organization's community dinners, where she could serve coffee and visit with people she knew or wanted to know.

Jack and Fran had four children Sherry, Lynn, Vicki, and Darby. As a couple, they loved to dance and spend time in the Bears Paw Mountains where they had a cabin. Later in life, after Jack died, she had a new dance partner and friend in Burk Burkhartsmeyer from Chinook. They delighted in dancing to live music at the Eagles and the VFW.

Fran was preceded in death by her husband, Jack; her parents; and all 10 of her siblings.

She is survived by many relatives including her children, Sherry Strong, Lynn and Rhonda Minnick, Vicki and Jay Billmayer, and Darby and Cheryl Minnick. Fran has many grandchildren, great-grandchildren, and great-great-grandchildren. She was a kind and loving grandmother and will be missed by her family.

Fran's memorial service will be at 10:30 a.m. Saturday, October 15, 2022, at St. Jude Catholic Church in Havre. Donations can be made to the Salvation Army, one of her favorite shopping spots, or a charity of your choice.

Please visit Fran's online memorial page to send a card or leave a message of condolence for her family at http://www.hollandbonine.com .