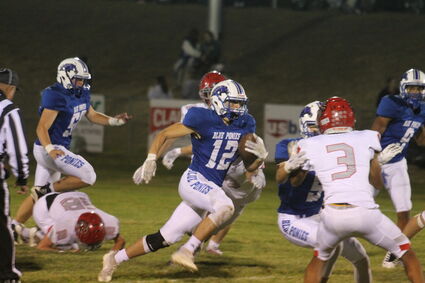 Havre's Tate Nelson runs the ball against Lockwood on Friday night at Blue Pony Stadium. In their homecoming game, the Blue Ponies defeated Lockwood, 36-7, for their third straight win.

The Havre High football team has been on a tear lately and if Friday night at Blue Pony Stadium is any indication, it will not be slowing down soon. In their homecoming game, the Blue Ponies defeated the visiting Lockwood Lions 36-7. Despite some early turnovers, the Ponies put together a strong effort to win their third straight game."

After forcing a Lockwood three and ou...