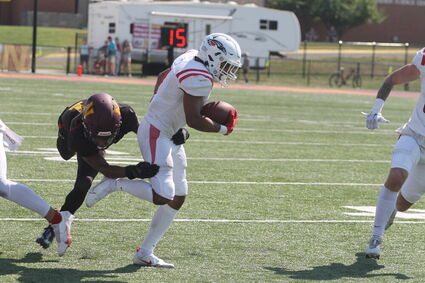 The Southern Oregon Raiders are on a three-game winning streak as the Frontier Conference has reached its annual bye week.

While a few teams have had a bye already, now, it's official, as the Frontier Conference has reached its annual week off.

And while there are still four games left in league play, and anything can happen, it's starting to look like, for the second time in three years, the College of Idaho Yotes are the cream of the Frontier crop. After last week's last-minute win over Montana Tech, the Yotes remained the only team unbeaten in the Frontier and are now ranked eighth in the NAIA. Behind a dynamic rushing attack, C of I has become yet again, a Frontier power.

C of I has already run the gauntlet of late, and they have one more hurdle to go, as they travel to Montana Western next Saturday, which will be the Yotes fourth game in a row against either a ranked, or formerly ranked team. However, if C of I prevails, the Yotes get the next two games against teams with losing records, before finishing the season with a home game against Carroll College. So, the road to the Frontier title is there for the Yotes to take.

If the Frontier is going to get two teams in the playoffs this year, which the league most definitely deserves, it's likely going to mean Rocky Mountain College, at 5-1, can't lose again this season. Rocky won the league title a year ago, and the Bears have won four straight, and don't have to play C of I again. Ranked No. 15 at the bye week, the Bears are now firmly looking at a chance to win the Frontier (with some help), but also are now on the inside of the playoff bubble.

After the heartbreaking loss in Caldwell, Montana Tech fell to 4-2, with their two losses coming by a combined 13 points. If Tech were to win out, the Orediggers may rise high enough to make the playoffs, but it's a longshot, as it is for Carroll College, which is also 4-2.

It's likely too late, but Southern Oregon sure has rebounded. The Raiders have won three straight after losing the first three games of their season. Last Saturday, SOU demolished Western, which has now lost three straight, with the Raiders riding backup quarterback Blake Asciutto to a 416-yard, four-TD performance.

Known of their passing attack, the Raiders offense has really come alive as of late. In their last three games, they're averaging over 30 points per outing, and while the Frontier title and playoffs are out of reach, SOU could play spoiler for sure, as the Raiders play at Tech and at C of I in the next two games.

With four games left, Asciutto is leading the league in passing at 247 yard super game, and overall, passing is really down this season, as no other quarterback is averaging over 200 yards per outing. The league also doesn't have a 100-yard rusher right now as C of I's Hunter Gilbert averages 94 yards per game. Gilbert is the only rusher to average over 90 yards a game as well. Montana Tech's Trevor Hoffman is the leading receiver in the Frontier at 93 yards per game.

On the other side of the ball, SOU linebacker Jake Regino leads the Frontier at 11.8 tackles per game, while Northern's Hunter Riley is second at 10 per game and Dylan Wampler is fourth at 8 per game. Western's Jake Aragon leads the league in sacks at five, while Wampler is tops in tackles for loss with 7.5. Rocky's Kaysan Barnett and Eastern Oregon's Josh Mendoza are titled for the league lead in interceptions, each with four.

SOU's Christian Granby is the Frontier Offensive Player of the Week. Graney is a 5-foot-11, 180 pound, senior wide receiver from Sanger, Calif. In Southern Oregon's 49-14 home win over Montana Western, Graney caught 10 passes for 267 yards and two touchdowns (57, 70). He moved to seventh on the Raider all-time list for career receptions with 154.

Regino is the Defensive Player of the Week. Regino is a 6-foot-1, 220 pound, senior linebacker from Sacramento, California He was also named the NAIA Defensive Player of the Week. In Southern Oregon's 49-14 home win over Montana Western, Regino recorded 15 tackles (nine unassisted, six assisted), one sack (-6 yards, one strip sack), two tackles for loss (-7 yards), one interception and Regino becomes the first Raider since 2014 to record 10-plus tackles in four consecutive games.