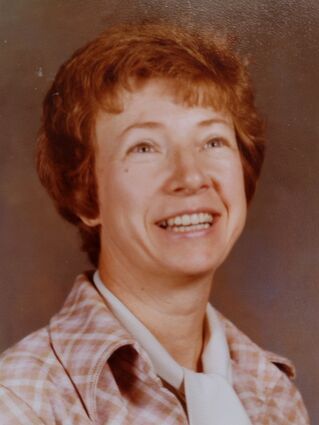 Delores (Ash) Helmbrecht passed away on September 16, 2022, at the Liberty County Nursing Home.

Dee was born in Underwood, ND, on February 26, 1931, to John and Dorothy (Reimann) Ash. She was the oldest of four siblings. Dee was raised on the farm, attending country school and later graduating from Underwood High School. She went on to graduate from Minot Teacher's College with a certificate in elementary education.

Dee's first teaching job was in Scobey, MT, where she met the love of her life, Charles "Speck" Helmbrecht. They were married in 1952. From Scobey, the couple moved to Helena in 1954, where Dee continued teaching. Daughter Shelley was born in 1958. Another move in 1959 landed them in Chester where Dee again continued to teach. In those days, the school systems didn't include kindergarten, so Dee opened and ran one privately from 1963 until 1970. Son John was born in 1965. Dee and Speck moved their family to Havre in 1970 where Dee went back to school to obtain her bachelor's degree, eventually obtaining her master's degree. She then taught in the Havre school system until her retirement in 1993. The couple moved to Hingham in 1995 to be closer to their grandkids, attending every program, game, match and meet they could possibly get to. They moved to Timber Creek Village in Havre for a year and then came back to Chester where they loved living at the Sweet Grass Lodge. They made many good, lifelong friendships everywhere they lived. Speck passed away in 2021.

Dee's obvious passion in life was teaching people. She taught her kids and grandkids the beauty and love of nature and the art of cooking. Even while living in the nursing home, she continued to interest people in the cycles of nature by keeping track of the times of sunrises and sunsets every day.

Dee's greatest love was for gardening! She was a true farmer's daughter. She created and cared for beautiful perennial flower beds and vegetable gardens wherever she lived. Any time of day, you could find her in the garden. She grew and propagated lots of African violets to enjoy and share with friends. Dee died as she lived, full of grace and kindness and always with a smile. She will be greatly missed by all who knew her.

Cremation has taken place. No services are planned at this time. Condolences to http://www.asperfh.com .