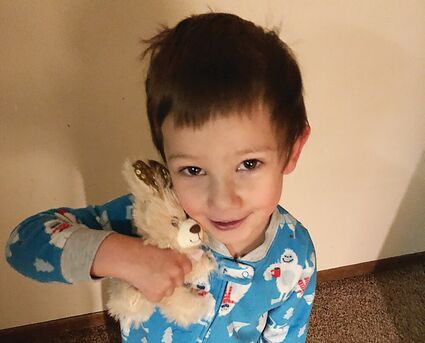 Jaspen Ochoa, 4, smiles at the camera. Jaspen, who has hypoplastic left heart syndrome, is about to be put on a waiting list while a search is conducted to find a suitable heart for transplant surgery. A fundraiser to help with medical expenses is scheduled Saturday at the Havre Eagles Club.

Local resident Sonni Ochoa is holding a benefit dinner for her 4-year-old child Jaspen, who is in need of a life-saving heart transplant, a procedure that is just another step on a long, difficult and expensive road for him to live as normal a life as possible with hypoplastic left heart syndrome.

The dinner is being held Saturday at the Havre Eagles Club from 6 to 8 p.m. with enchiladas, Spanish rice and beans for $15 a plate, as well as nachos for children.

It also will feature a silent auction, with all proceeds going to her son's medical care.

The condition Jaspen has is a birth defect that causes the left side of the heart to not develop properly, a condition which is extremely dangerous and requires a series of major surgeries to survive.

Ochoa said her son's case was such that he was effectively born with half a heart, and he required two major heart surgeries in the first 10 months of his life, surgeries he, thankfully, recovered from quickly.

She said normally children born with this defect need a series of three surgeries before eventually being put on the heart transplant list between the ages of 10 and 20, but they found out recently that Jaspen is ineligible for the third surgery, so they need to go on the list early, which makes their situation much more complicated.

"It was devastating news," she said.

Ochoa said it's very difficult to find compatible donors at her son's age and even in the best-case scenario, where they find a compatible donor and it is not rejected by Jaspen's body, the operation will require him to take heavy–duty immunosuppressants, which will likely require him to be isolated from the outside world and live in the hospital for some time.

She said her son's condition left him immunosuppressed to the point where a simple cold could send him to an intensive care unit, but even during the pandemic he was still able to have friends and go to school.

The family would be extremely careful getting vaccinated as soon as possible and isolating if anyone Jaspen regularly came into contact with showed signs of illness.

They would also need to be extra sure to wipe down surfaces and anything they brought into their house, but even with all of these precautions, Ochoa said, Jaspen had everything a boy his age might expect from life.

She said outside of a stroke he had, they haven't needed to go out of state for treatment since those initial surgeries during the first year of his life.

Ochoa said even if everything goes right they are looking at a long road of medication, treatments and cardiology appointments, and even with their insurance, the medical expenses are going to be very large and last for all her son's life.

She said her son has a history of recovering from surgery remarkably quickly, which gives her hope, but the adjustment they're going to need to make life work after this surgery is going to be hard and may involve doubling or tripling Jaspens medication as well as needing to use a feeding tube for food.

"With any kind of transplant you're exchanging one disease for another," she said.

Despite the difficult journey ahead, Ochoa said the community has already shown a great deal of support, with a tremendous amount of donations for the silent auction already received, including local businesses and institutions like Montana State University-Northern, Valley Furniture and First National Pawn to name just a few.

"I cannot thank everyone enough," she said.