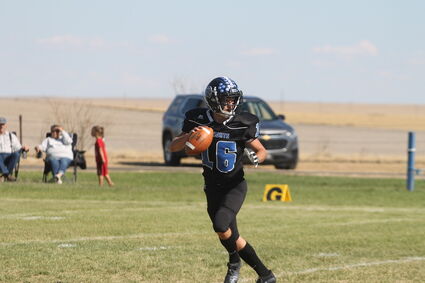 Gavin Spicher looks to pass during a North Star Six-Man football game last month in Rudyard. The Knights are one of three area Six-Man teams to make the playoffs, while two 8-Man squads also start postseason play this weekend.

After several weeks of hard work and many competitive games, postseason footbal has arrived on the Hi-Line. Many teams from Northern Montana will be looking to compete for a state championship over the next few weeks, so it is sure to be an exciting end to the fall.

The Big Sandy six-man football team has lofty goals this postseason after going 9-0 and finishing first in the Northern division this fall. They also only lost by four to the eventual state champions in the semifinals last year, so they feel like they are primed for a state title run.

This Saturday, the Pioneers will begin that quest at home as they will host Savage. The Savage Warriors had a strong season to make the playoffs as they went 6-2 to finish third in the Eastern division. They started the season especially strong with three shutout wins to start the fall. However, the Warriors have gone 2-2 in their last four games, including a 50-39 loss to Richey-Lambert to finish the regular season.

Meanwhile, the Pioneers have made it look easy as they went undefeated in the regular season. Outside of a win by forfeit, all the Pioneers' wins came by an average of 56.9 points a game. The closest game for the Pioneers this season was a 46-6 win over White Sulphur Springs at the beginning of the year, so the Pioneers have not been challenged yet this year.

The Pioneers have many players who can lead them to victory. Braydon Cline gets many snaps at quarterback and is efficient both throwing and running the ball. He has many playmakers to distribute the ball to including Kody Strutz, Lane Demontiney and Rusty Gasvoda.

The Chester-Joplin-Inverness six-man football team will also be heading to the postseason this weekend. In the regular season, the Hawks went 6-2 to finish third in the Central division. With their finish, the Hawks will head on the road to face Hot Springs this Saturday.

Hot Springs will be a formidable opponent for the Hawks to start the postseason. With a 6-2 record, the Savage Heat finished first in the Western division to secure a home game to start the playoffs. After an 0-2 start to the season, Hot Springs found its rhythm with six straight wins to end the regular season. In just their last two games against Lima and West Yellowstone, the Savage Heat won by an average of 47 points a game.

The Hawks have also had a strong year to make the postseason. The high-flying offense led by the likes of Nate Nelson, Braden Mattson and Adam Grammar have led the Hawks to success this year and a 6-2 record. Even in their two defeats this fall, both losses came by a single possession.

The only common opponent between CJI and Hot Springs this season is Highwood, which might be a good sign for the Hawks. Hot Springs opened the season with a 32-18 loss to Highwood while CJI survived a shootout against Highwood for a 44-43 victory.

The North Star six-man football team will also be heading to the playoffs. In the regular season, the Knights went 5-3 to finish third in the Northern division. To start the postseason, they will head on the road to face Broadview-Lavina.

The Pirates will be a formidable foe as they are undefeated with an 8-0 record to finish first in the Southern division. Only two games were single-possession games for the Pirates this year as they won by an average of 38.9 points a game.

It was not an easy road to get to the playoffs for the Knights. They started the season with a 1-3 record, but have won four straight games to end the regular season to qualify for the postseason. During that stretch, the Knights averaged 54.2 points a game.

The 8-man football playoffs will also begin this weekend with a pair of schools representing the Hi-Line. The Chinook 8-man football team will be heading on the road to face Ennis this Saturday to start the playoffs.

The Chinook Sugarbeeters have had a strong year with a 7-1 record to finish second in the Northern division. If not for a 46-12 loss to Belt to end the regular season, the Sugarbeeters would have been hosting a playoff game this weekend. Before that loss, Chinook dominated in its 7-0 start with an average margin of victory of 21.4 points a game.

Like the Sugarbeeters, the Ennis Mustangs went 7-1 in the regular season. The only difference is that the record earned the Mustangs a first-place finish in the Central division and a home game to start the postseason.

The Fort Benton 8-man football team is the other Hi-Line team competing in the postseason this Saturday. The Longhorns will also have to play on the road as they head to Fairview Saturday afternoon.

The Longhorns will look for a repeat of last year's postseason where they made it all the way to the semifinals. But if they want to do that again, they will have to face a tough Fairview squad to start the postseason.

The Fairview Warriors went 6-2 during the season to finish second in the Eastern division. Their lone losses came to tough teams such as Belt and Culbertson. But in their six wins, the Warriors dominated with their closest win being a 26-0 victory over Scobey. The only common opponent between Fort Benton and Fairview this season was Belt. Both teams lost to the Huskies with Fairview suffering the closer loss of 30-12.