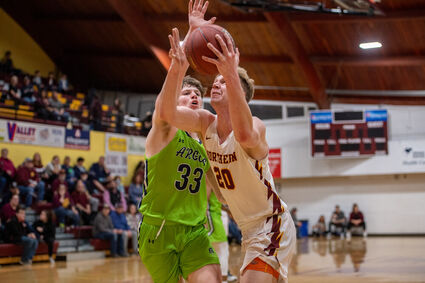 Jesse Keltner and the Montana State University-Northern Lights are set to open the new season when they host The King's University Friday at Havre High, then play Lethbridge Saturday in the Armory Gymnasium.

Roster changes are always a challenge in the world of college basketball. It's no different at Montana State University-Northern. And yet, year-after-year, season-after-season, head coach Shawn Huse's program just keeps on being consistent.

Now, as a new season dawns, the Lights, with a mix of fresh faces and veteran returners, will look to continue that consistency, as Huse is once again at the helm of the ultra-successful Northern program.

"We are early on in the process, polishing up roles for new guys and returners right now," Huse said. "I love the chemistry being developed, and that is due in large part to our leaders. It will take time to develop and reach our full potential but I like the early signs. You don't just graduate Mascio and David from your program, and pick up right where you left off. Game experience will be a big key for this team."

Game experiences comes this weekend, as the Lights open the season at home. And that experience will be much-needed as they look to replaces stars like Mascio McCadney and David Harris. McCadney was an NAIA All-American and three-time All-Conference performer, while Harris was a two-time All-Conference standout, and both are members of Northern's 1,000-point club.

Those two, of course, will be nearly impossible to replace, but the Lights will be anything but short on talent.

Seniors Jesse Keltner and C.J. Nelson return to lead the Lights. Keltner made the Frontier's All Defensive Team last season, averaging 10 points and seven rebounds per game, while Nelson scored seven points a night as MSU-N's starting point guard. Fellow seniors Immanuel Anderson and Anthony Braggs are also back as is junior sharp-shooter Tanner McCliment-Call, and veteran forward T.J. Reynolds, giving the Lights an experienced nucleus to work with.

But as veteran as Northern's roster is, the Lights will also mix in key newcomers, including Zack Martinez, a 6-2 junior guard from Los Medanos Community College in California, where he averaged 16 points per game, as well as junior Myles Dalton, who scored 12 points per game at Wayne County CC in Michigan. Jacob Randall, a 6-11 transfer from William Woods, and freshman Dae'Kwon Watson, a 6-1 guard from Auburn, Washington, are also expected to contribute right away.

"I think this year's team will be very balanced on offense and tough on D," Huse said. "We have many multi-faceted players who can make a difference on both ends of the floor, and in transition.  Time will tell on what our complete identity is, as this is a new year with some new faces in the mix. At the end of the day, though, I believe this is a hard-working group and that fans will see a squad getting after it on both ends of the floor together as a team."

Northern's non-conference schedule will help with the process. The Lights open with five straight home games, before heading to a tournament in Puget Sound, Washington, as well as an exhibition game at the University of Montana. December also includes a road trip to Phoenix to play NAIA poets Hope, Vanguard and The Master's, before finishing the non-conference schedule at home Dec. 29-30.

All of those games will certainly get the Lights ready for the rigors of the Frontier Conference, which will again start in early December, and feature Thursday 7 p.m. games and Saturday 4 p.m. games. All roads also lead to the new Frontier tournament, which will be at the end of February in Great Falls.

"We have a very challenging non-conference schedule. Playing the Griz (U of Montana) is of course a challenge, our Chandler (Arizona) schedule is the toughest we have had since joining it about eight years ago, and we have several other tough games on the road and at home," Huse said. "Scheduling games to get us ready for the Frontier season is always a challenge. I think we did a very good job of finding tough games that give us a good taste of what each night is like in our league."

And that's the goal, succeeding in the Frontier, and the Lights, as always plan to do just that. And Huse sees that as a long process that starts with this weekend's home games against The King's University Friday night at Havre High School, and Lethbridge Saturday night at the Armory Gymnasium.

"Well, the long-term goals are always a conference championship and National Tournament run," Huse said. "For the short term though, our expectations are just simply to improve and find our rhythm. This is a new year with many new faces, and with returners potentially having to adjust their roles. It will take time with this team to reach its full potential, but I do believe it is a great group of guys who love being around each other and playing together. They have been a lot of fun to coach each day in our workouts. If we defend like we are capable of, and score at a high percentage we have a shot to be in the mix in the end once again."