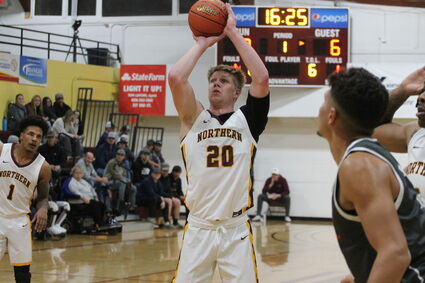 Northern's Jesse Keltner shoots a free throw against Northwest Indian College at Armory Gymnasium Thursday night. Despite a slow start, the Lights won, 100-45, to improve to 3-0 on the season.

Early Thursday night at Armory Gymnasium, it looked like the Montana State University-Northern men's basketball team was in for a tough night. The Lights' opponent, Northwest Indian College, played tough in the first half and even had the lead at one point. While the Lights got on a roll and pulled away for a 100-45 win in the second half, MSU-N head coach Shawn Huse believes the Eagles made the Lights work for it.

"I'll give credit to NWIC. They came in here and they played very smart basketball. They do a lot of things that disrupt you," Huse said. "Got to give them a lot of credit for...