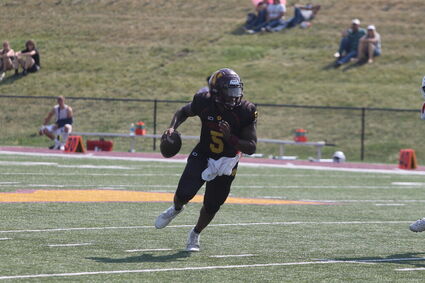 After nearly a month away, Kaymen Cureton and the Lights return to Tilleman Field to face Rocky Mountain College this Saturday. The game will be a rematch of 56-0 victory for Rocky Mountain in Billings earlier this season.

The Montana State University-Northern football team has been away from the friendly confines of Tilleman Field for too long. Over the past three weeks, the Lights have either been on their bye or playing a game on the road. Now, the Lights are back on the Hi-Line this Saturday with a game against Rocky Mountain College.

"As you go into these rematch games the second time through, it's different for our staff and there's a little different approach to it," Souers said. "But we're looking forward to it. We got two opportunities left in our season to continue to improve, develop experience and develop our skill sets and that's what we have to build on."

While the Bears will be a tough opponent for the Lights this weekend, the Lights will get to host the game at Tilleman Field. It will be their first home game since Oct. 8, so Souers believes it will help the Lights in their preparation this week.

"Being at home, I think it allows us to train and get more rest," Souers said. "Rest is important for us to get our guys as healthy as we possibly can in between Saturdays."

The Bears are fourth in the Frontier Conference standings with a 5-3 record. The Bears have been facing their own adversity lately with a two-game losing streak heading into this weekend. The Bears were on a four-game winning streak before they lost, 24-0, to Carroll College on the road. The Bears then lost, 20-17, to Montana Tech at home last weekend.

Despite these recent struggles, the Bears have many players on their roster that can steer them back in the right direction. Quarterback George Tribble Jr. is the leading passer for the Bears as he has completed 53.9 percent of his passes for 949 yards, eight touchdowns and seven interceptions.

As a unit, the Bears offense is fifth in the Frontier Conference averaging 354.0 yards and 26.9 points a game. On the ground, Zaire Wilcox leads the Bears with 589 rushing yards and five scores on 3.9 yards a carry. In the passing game, Trae Henry is a reliable receiver with 27 catches for 511 yards and five touchdowns this season.

On defense, the Bears are second in the conference allowing only 15.9 points a game this season. Linebacker Nolan McCafferty has been strong in the middle with 57.0 total tackles this season. In the secondary, defensive back Kaysan Barnett has been a playmaker with four interceptions this fall.

The Lights will have their work cut out for them against the Bears. Against a tough defense, the Northern offense will have to produce far above their averages for the season as they are last in the conference averaging 2.3 points and 72.6 yards a game.

Quarterback Kaymen Cureton will look to get the offense moving even though he has only completed 41.9 percent of his passes for 327 yards, a touchdown and four interceptions this year. The Lights ground game has also struggled with Mason Dionne leading the team with 114 yards on 1.5 yards a carry.

On defense, the Lights have also had their struggles allowing 50.1 points and 472.1 yards a game this fall. Despite the defensive struggles, linebacker Dylan Wampler has turned in another strong season for the Lights with 70.0 total tackles, 8.5 tackles for loss and 4.5 sacks. In the secondary defensive back Joshua Rose has been opportunistic with four interceptions.

The Lights have had a rough season with an 0-8 record. They have a young roster with little depth, unlike programs like RMC that have many experienced players to fill out the large roster. As the Lights try to build their program, Souers believes RMC is the example that they should strive for.

"They got backup players that can compete just as well as the starters," Souers said. "It's hard to find an everyday weakness in some of these programs that are further along and more mature than ours right now."

The Lights only have two more games this season, this one against RMC and next week at home against Montana Tech. It has been a tough year for them, but Souers hopes to see his players continue to improve as they try to set the foundations for the program.

The MSU-N football team will kick off against RMC at Tilleman Field this Saturday at noon.