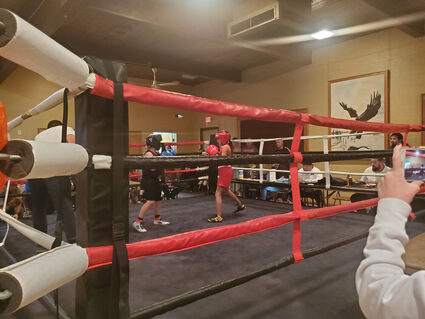 Kendyl Jensen of Rock Hound Boxing, left, faces off against Melanie Green of Championship Boxing Missoula, right in a pound fight, the fourth match of the night.

The Eagles' Club Saturday hosted the return of boxing to Havre on, the first officially sanctioned boxing event in town since 1999.

The event, the Inaugural Railtown Smackdown, was organized by the Rock Hound Boxing Team out of Havre, and the Hays Amateur Boxing Gym. It was sanctioned by USA Boxing and featured young boxers ages 8 and up from teams throughout Montana and Canada.