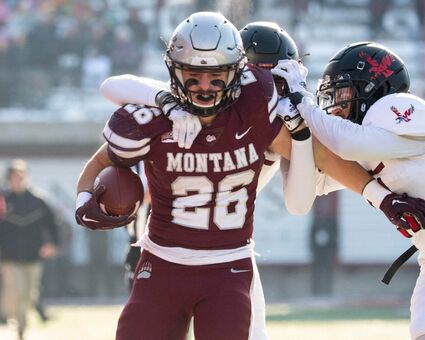 MISSOULA - The Montana Grizzlies scored early and often while the defense was once again stellar in a 63-7 Big Sky Conference demolition of Eastern Washington on a bluebird Saturday at Washington-Grizzly Stadium.

On another near-record day for running back Nick Ostmo, No. 16 Montana racked up 604 yards of total offense, controlling the run game with 337 of those on the ground. The offensive outburst is now the third-most total yards in program history after putting up 612 yards against Cal Poly a week ago.

With the win, Montana crossed the requisite seven-win playoff eligibility threshold, improving to 7-3 overall and 4-3 in league play.

Montana has now won its last two games by a combined 120-7, scoring 121 unanswered points between the fourth quarter of the Weber State game and the third quarter of the EWU game.

The Grizzlies appear to be returning to full strength at just the right time, with the rivalry game against Montana State and potential playoffs looming.

"It was just an outstanding effort by our guys to go out and take that win, throw the punches early, and just flat go after them. And I guess if I was going to summarize it, I'd just say that the reports of the demise of the Montana Grizzlies were greatly exaggerated," said head coach Bobby Hauck after claiming his 115th win at UM.

Less than a week after racking up a career-high 260 yards against the Mustangs, Ostmo was once again the spark the Grizzlies needed. The sophomore scored two touchdowns and piled up 145 total yards on just four touches of the ball in the first five minutes of the game.

In a two-week span, the Portland native has rushed for 367 yards on 37 carries, caught four passes for 102 yards and has six total touchdowns.

Lucas Johnson was once again dealing for the Grizzly offense, going 10-16 for 200 yards and two touchdowns in the air before leaving with an injury. Freshman Daniel Britt didn't miss a beat when he went under center in the second quarter, though, going 8-11 for 67 yards and a score in the air and rushing for 73 yards and another score.

Defensively, Robby Hauck had a game-high 12 tackles and a half-TFL on senior day, making his 50th-consecutive start at Montana as the Griz racked up 11 tackles for loss and two sacks.

After the Grizzly defense forced a three-and-out on the opening drive, Montana went right back to the well on offense to start the game.

It was all Ostmo on UM's first possession of the day. After punching one up the middle for a short gain on the first play, Johnson found Ostmo twice on a quick-out along the right sideline, the first for 45 yards and the second for 18-yards and a touchdown. The quick strike took all of 57 seconds off the clock and put the Griz up 7-0 early on.

After another fast stop for the Griz defense, the hot hand of Ostmo struck again in short order. On the first play of the drive, the sophomore busted a gap up the middle wide open, shook off a couple would-be tacklers and was off to the races, covering 80 yards for his second score in five minutes of gameplay. The play, now tied for the second-longest touchdown run in program history, gave Ostmo two touchdowns off 145 yards of offense from just four touches of the ball.

Another defensive stop later, Montana struck quickly again, this time through the air. Johnson found Mitch Roberts on the left sideline for a gain of 35 on the opening play of the drive. Ostmo picked up 11 with a rush up the middle before Johnson found Isiah Childs for 13 more on the next play. Johnson then found Keelan White wide-open in the endzone for another Grizzly touchdown.

White's score put UM up 21-0 at the end of a dominant first quarter for the Griz, with 225 yards of total offense and three touchdowns, with the defense leaving the Eagles with just 47 yards in the opening period.

Montana didn't take long to pile on more points at the start of the second quarter, either. On the first play from scrimmage, Johnson found Cole Grossman across the middle, who went beast mode, palming-off tacklers on his way 47-yards down-field before finally stepping out of bounds at the two. Ostmo capped the drive one play later for his third touchdown of the day to put Montana up 28-nothing.

Another stop from the defense resulted in another opportunity for Ostmo and the Grizzly offense, and they took full advantage.

After a couple more nice runs from Johnson and Childs, Ostmo marched 23 yards along the left sideline for his fourth touchdown of the day to give the Griz a 35-0 lead.

Johnson and the offense extended that scoring streak soon after another defensive stop, finding Childs open for a gain of 20. That completion set up Childs again on the next play for another Grizzly touchdown from two yards out, extending the lead to 42-0 with four minutes to play in the half, with the Grizzlies already having racked up 396 yards of total offense.

Montana fans held their collective breath on that drive, however, with Johnson going down with an injury, but was able to jog off the field under his own power, but it would be his last action of the day.

Britt then came in at backup to make his second-straight appearance at quarterback and impressed with a 73 percent completion rate and two touchdowns on consecutive drives.

The Eagles had a chance to get on the board at the end of the first half, but Wyatt Hawkins pulled the 37-yard field goal attempt wide-left, and UM's scoreless streak intact.

The Griz didn't skip a beat at the start of the second half, with Garrett Graves taking the opening kickoff back 77 yards EWU 15.

One play later, Britt hit a wide-open Grossman in stride in the end zone for another Montana touchdown, and the Griz extended the lead 49-0 in the blink of an eye. Britt piled on more points in the next drive, rushing in from 22 out with 11 minutes to play in the third quarter.

Eastern Washington finally got on the board later in the third quarter with backup QB Keoka Visperas finding Blake Goebel in the middle of the end zone to cap a 12-play, 87-yard drive that was helped along by a roughing the passer penalty against UM early on.

Lead by Britt, Montana's youngsters then took the field, with most of the 80-plus players dressed getting in on the action.

True freshman running back Eli Gillman got three touches of the ball late in the game and turned one into his first career touchdown, bursting in from 19 yards out for the final score of the game.

The No 3 Bobcats (9-1) not only scored 70 points for the first time since a 77-point output against UC Davis in 2014, but also set the single-game rushing record with 554 yards.

In scoring the fourth-most first-quarter points and the fifth-most first-half points in Bobcat history, Montana State put the game out of reach before halftime. Marqui Johnson scored on touchdown runs of 12, 71, 36, and 78 yards in the first half, totaling to an amazing 218 yards. As a team, the Cats gained 357 yards on the ground and 437 total yards.

Cal Poly's Spencer Brasch enjoyed a productive first half, throwing for 164 yards with a touchdown and an interception. Yet the Bobcat defense would turn two of his turnovers into 14 points in the first half alone.

With backups playing on both sides of the ball for the second half, the Bobcats extended their lead with Sean Austin under center on the first possession of the half. Austin threw the first touchdown pass of his career - a 7-yard strike to Aidan Garrigan - to put MSU up 58-14. The Mustangs would score 14 third-quarter points, yet those would be offset by Austin's touchdown pass and Garrett Coon's first score of the day.

Austin threw a 27-yard touchdown pass to Coon to start the fourth quarter and make it a 72-28 game. Austin would finish 5-for-6 with 110 passing yards and two touchdowns, plus two rushing yards on three attempts.

Now, Montana and Montana State will finally meet in the 121st Brawl of the Wild in Bozeman. The game kicks off at noon Saturday in Bobcat Stadium, where ahead of time, ESPN's College Game Day will be on hand. The most famous college football pre-game show ever is coming to Montana for the first time, and for only the fifth time to an FCS location.