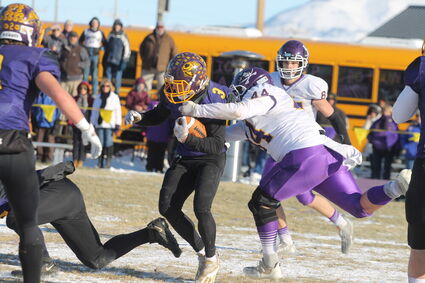 Big Sandy's Cooper Taylor runs the ball against Broadview-Lavina in the Six-Man football championship game Saturday. Taylor scored on the first play from scrimmage and the Pioneers never looked back as they won, 67-27, to win their first state title.

Just like it had done all season, the Big Sandy Six-Man football team made it look easy in the state championship game against Broadview-Lavina. Throughout their undefeated season, the Pioneers rolled over the competition and they did that at home once again Saturday when they defeated the Pirates, 67-27, to win their first state title in school history.

"To win by that many points and play such a good game as a team, it's amazing and unreal," senior Rusty Gasvoda said about winning a state championship. "All the hard work we put in, it paid off huge."