Havre wrestlers ready to get back on the mats 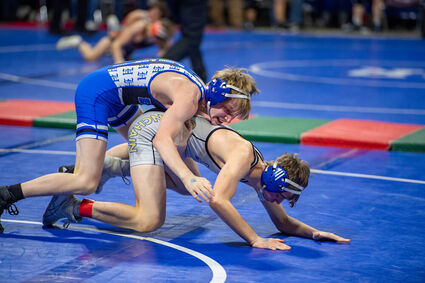 The new season is finally here for the Havre High wrestling teams as they look to pick up where they left off from last winter. In last season's state tournament, the HHS boy's team took home second place while the HHS girl's team competed to cement itself as a program in the state of Montana. While the Blue Ponies lost four seniors to graduation, HHS head coach Beau LaSalle expects more success on the mats this season.

"We expect to be a top-three team and hopefully come out with the state championship," LaSalle said. "(We expect to) just get the best we can out of each kid at the end of the year and qualify all of our guys for the state tournament."

Carson Harris, Reinhardt Bold and Pierce Caplette will also come back after placing in their weight classes at state last year. After they competed at state, Matthew Lemer, Colter Solomon and Landon Caplette will look to improve this winter. Along with newcomers to the program such as Reed Mantle, Brandon Healy and Tommy Lewis, the Ponies have a deep roster that will help them come postseason.

The Ponies will also have more wrestlers on their girls team this season, so keep an eye for them on the mats. Along with the return of several experienced wrestlers, LaSalle expects to see growth and more success this winter.

"The girls all have state tournament experience so they know what to expect," LaSalle said. "Some of our girls put in a really good summer and I just expect them to keep climbing."

Aliyah Stiffarm returns for the Ponies after finishing fourth at state last year. Brooklyn Nelson, Maleigha Fuzesy and Clara Laird also return after competing at last year's state tournament and they will be looking to have better seasons this winter as they try to help the HHS girl's wrestling program grow.

The Ponies will once again compete in the Eastern A this season. In their conference, LaSalle expects defending state champion Sidney as well as Laurel and Miles City to be some of the toughest programs this season. Out of the west, LaSalle expects the likes of Columbia Falls and Ronan to contend at state, so the Ponies will have plenty of tough competition if they want to get back on the podium.

Over the next few months, the Ponies will have a long schedule ahead of them. They will start the season at home this weekend with a pair of tournaments in the Havre Mixer and the Havre Invitational.

The Ponies open 2023 on Jan. 3 with a dual against Glasgow at home. A couple days later, the Ponies will host Hardin for another dual. The Ponies will then wrap up that weekend with a meet in Cut Bank.

Over the rest of January, the Ponies will wrestle in meets in Missoula and Browning as well as duals in Great Falls and Lewistown. The Ponies will then host the Eastern A Divisional Tournament in Havre Feb. 4 before heading to the Metra in Billings for the state tournament the following weekend.

Looking at the schedule, LaSalle does not expect any easy meets or duals for the Ponies. But with their ultimate goal being another state trophy at the end of the season, LaSalle believes a tough slate will prepare the Ponies for the postseason.

"I think we have a really tough schedule and that makes it exciting," LaSalle said. "We challenge ourselves every week."

The HHS wrestling teams will begin the season this Friday with the Havre Mixer at Havre High Gymnasium.