Bridge dedicated to airmen who died in Blaine County

Bridge is near Harlem's Airmen's Memorial 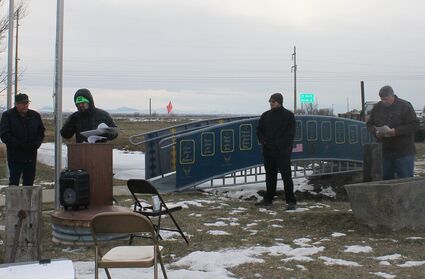 People brave the cold at Harlem's Centennial Park Wednesday for the dedication of the new bridge at the park dedicated to the 13 U.S. Air Force airmen who died in a crash during a training exercise Nov. 30, 1992.

The Harlem Airmen Memorial Committee dedicated a new bridge at Harlem Centennial Park to the 13 airmen who died in the skies over Blaine County 30 years ago in a tragic training crash.

Two U.S. Air Force cargo planes conducting nighttime training exercises at 25,000 feet near Harlem Nov. 30, 1992, collided and crashed to the ground, killing all on board the two planes.

A memorial for the men killed was created in Centennial Park in Harlem, and the bridge at the park was dedicated on the 30th anniversary of the crash.

Committee Co-Chair Darwin Zellmer acted as the master of ceremonies for...