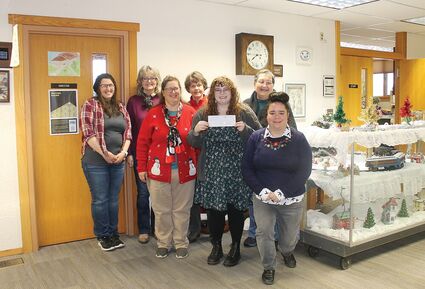 The Havre-Hill County Library just received its single biggest donation to pay for repairs made to its elevator, with a $5,000 check from BNSF Railway being accepted by members of the library's board and foundation board Thursday.

Library Director Rachel Rawn said the elevator has been having troubles for many years but broke down in January of 2021, and while it has been operational for the past year or so, it is still in need of updates that will prevent future problems.

Rawn said they had to replace a bunch of parts and the elevator was so old that said parts are hard to find and disruptive to replace.

"The whole process was pretty loud and dirty," she said.

She and Havre-Hill County Library Foundation Secretary Debbie Rhines said it is great to have this money from BNSF, but they are still concerned about ongoing updates.

Rawn said the time the library spent with the elevator out of commission was disruptive, as it didn't allow those with accessibility issues to browse the lower floor, which many really wanted to.

Rawn said finding funding for libraries is always difficult and a lot of people don't know how expensive it can be, especially when it comes to e-books which saw an increase in popularity during the pandemic.

She said they cost $80 to $100 just to license for 20 uses from their publishers and this expense makes it difficult for a lot of local libraries to even offer them as an option.

Thankfully she said, there is legislation that will be discussed during the upcoming legislative session that may alleviate some of these costs, but they will have to see.

As for the current issue of the elevator, Rhines said, they received many donations the moment the issue became public knowledge and, including the BNSF contribution, they received $5,850. The Foundation made up the difference to the repair costs, which totaled almost $100,000.

"As soon as people in the community heard, checks started rolling in," she said.

She thanked BNSF as well as the community for giving as much as they could.