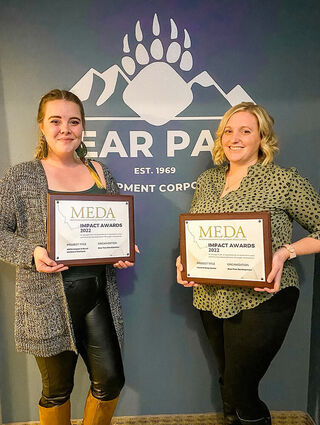 Bear Paw Development Corporation was recently awarded two impact awards from the Montana Economic Developers Association for their work securing $16.6 million in funds through the American Rescue Plan Act for infrastructure projects and for the abatement of asbestos and lead based paint in the former Griggs Printing Building in Havre, which made it possible for the H. Earl Clack Memorial Museum to move into the facility, which is renamed the Havre History Center.

The impact awards were announced during MEDA's fall conference in Great Falls in November.

"These two awards represent some of the best work our staff was involved with over the past year, and it's nice to be recognized by our peers throughout Montana for the effort to make our region in northern Montana better and more economically viable," Bear Paw Executive Director Paul Tuss said.

The first award represented the efforts of Bear Paw's Community Development Department to secure $16.6 million in ARPA funding through state and federal sources that was matched with other funds to create a $32 million impact in Bear Paw's five-county region to repair and rehabilitate critical and aging infrastructure, including water, wastewater and stormwater systems.  These funds will be used for 22 individual projects by fifteen local jurisdictions.

The second award focused on Bear Paw's Brownfields Program, which assessed and cleaned up asbestos and lead based paint in a large, two-story building in downtown Havre which at various times was both the Anderson Wholesale building and the Griggs Printing and Publishing building.  It was necessary to abate the contamination prior to when the H. Earl Clack Memorial Museum could move into the building and open to the public.

"Bear Paw Development continues to look for those projects that will make the communities we serve in our Economic Development District more livable and stable, as well as more inviting for business growth," Tuss said. "The projects represented by these awards are great examples of our commitment to the economic and community development of our area."