Blue Ponies get season started on the mats 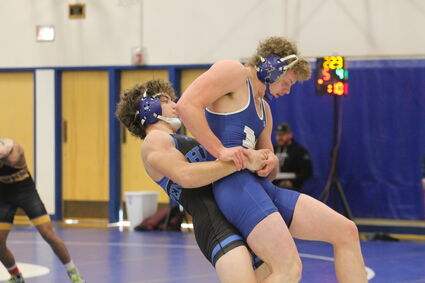 Kale Van Campen and the Havre High wrestling teams began their season this past weekend as they hosted the Havre Invitational. Multiple Blue Ponies placed to start the season.

The Havre High wrestling teams finally made their debut this winter with the Havre Invitational at Havre High Gymnasium this past Friday and Saturday. The Blue Ponies and other teams did not keep track of team scores, but HHS head coach Beau LaSalle was happy to see how his wrestlers performed in their first action of the year.

"I thought we wrestled pretty well in this first weekend," LaSalle said. "There were some technical mistakes that we need to look at on film and fix but across the board, I thought the kids competed really hard and overall wrestled well."

The Ponies were happy th...