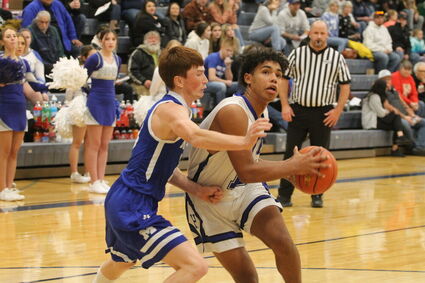 Havre's Tre Gary drives against Malta at Havre High Gymnasium Tuesday night. The Blue Ponies held strong as they defeated the Mustangs, 63-54, to improve to 4-1 on the season.

The night started with the HHS boys team playing Malta. After an early 4-4 tie, Tre Gary nailed a 3-pointer to give the Ponies the lead. Xavier Butler then kept it rolling with a layup. After Malta responded with a score, Jevin Jenkins and Butler scored back-to-back layups. Jenkins then made a layup and on...