Optics on the end of an era 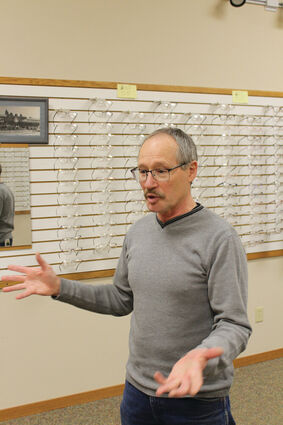 Jim Evans talks about the 42 years of operation of Evans Optical. The business is closing at the end of the week when Evans retires.

After 42 years serving the area, Havre business Evans Optical is closing its doors as the last of its founders, Jim Evans, retires from the eye-glass business at the end of the year.

Evans, whose last day is Saturday, said the business was family-owned and -operated from the beginning, with his uncle, Bill Evans, his dad, Tiger Evans, and himself starting the business at the end of 1980.

"Bill and I started it, but my dad invested in it," Evans said, adding that very soon after they were operational the business had enough customers his dad started working there, as well.

Evans Optical started as a lab serving eye doctors in Havre and across a pretty wide region, Evans said.

"We did work for different doctors up and down the Hi-Line - probably as far as Glasgow, Wolf Point, to Chester," he said, "and I think we even might have done stuff as far as Choteau that direction, and then some stuff down out of Lewistown."

Doctors would do the fitting and then send the prescription and frame they wanted the lenses for to Evans Optical, where the Evans' would surface the lenses and edge them to fit the frames.

About three years into the business, Evans said, they started selling direct to customers.

He said, Bill Evans got him started as an optician, teaching him how to be proficient with one step of the process before moving on to learn the next step, like an apprenticeship.

Bill Evans had worked for a few larger companies in his early years then started his own business in Havre with another partner, opening first in the 305 Building, known then as the Masonic Temple building. Jim Evans said he started working for his uncle there in 1977, before the two of them started Evans Optical.

The first Evans Optical space was on Fifth Avenue in the building that eventually became Yummy Yogurt, across from the Sixth Avenue Memorial Field. From there, Evans Optical moved to the Atrium Mall.

"We moved (to the Atrium) fairly quickly after we started selling to the public, just because the logistics were terrible for parking," he said about the Fifth Avenue location. "And I've been here for over 20 years now."

"Here" meaning in the same building as Bing 'N' Bob's Sport Shop which Evans also owns and will continue working in for now.

The three of them worked well together over the years, he said, and he credited their starting out early with each finding their own niche in the business. The customers probably had a harder time with the three Evans' working together, he said. Some people mistook his dad and uncle as father and son rather than siblings, and the obvious family resemblance among the three could get confusing,

He said they got to where they'd ask customers confused about which Evans they needed to talk to, "Was it the old guy, the tall one or the short one?"

Evans said they focused on service from the beginning, as well as low costs. And, he added, one of the great things about the business over the years was serving the community and seeing the same customers come back through the years bringing in their new generations as the families grew.

He added that for most of his years the only significant technological advancements in the process had been to make it faster. Recent advances in technology, though, have been pushing him to invest in a next generation of equipment.

"That's kind of one of the reasons that I'm going to retire is because of the equipment," he said.

His edger, he said, uses a pattern to cut and bevel the lenses. The pattern used to come with the frame, but newer machines will take a reading of any frame and create their own pattern, he said.

"Now they've gone to where everything's patternless, so I no longer get patterns. ... It's just taking longer because I have to make the pattern," he said, and he'd rather retire than invest in new equipment at this point.

Evans Optical has been the only optical shop in the area, where lenses are made onsite, Evans said, and is one of the few independent shops in the state.

He's just closing the business down, rather than selling, he added, but someone could make it work if they were ambitious on advertising and going after customers to get their name out there like the Evans' did in the beginning.

Evans, who said Tiger Evans retired in 1996 and Bill Evans in 2018, added that he doesn't have big plans for retirement, except to continue working at Bing 'N' Bob's at least until his wife retires. The sport shop, though, will allow more flexibility because he has employees who can take over when he wants to get away.

"It is true what the old-timers tell ya - time flies," he said, "faster and faster over the years."