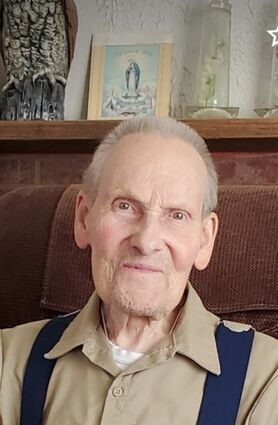 Please visit Vic's online memorial page to send a card or leave a message of condolence for his family at http://www.hollandbonine.com .

Vic was born May 9, 1929, north of Hingham to Joseph and Frances (Pester) Spinler. He was raised on the family farm north of Hingham, attending country school near there. After his school years, Vic farmed with his dad and brother, Ben, until the 1960s when he relocated to Havre. There, he found work as a maintenance man at the Park Hotel, a position he held until his retirement, which he put off until his early 80s. He had been with the Park Hotel for so long, the owner named Vic's Place after him, even though he never drank.

Vic enjoyed repairing radios and televisions. Many people knew him around Havre by his large station wagon and an adult tricycle he rode around his block. His entire life, Vic was a very devout man of faith whose life was centered around prayer. In the early '70s, he left the Catholic Church and became a member of The Renewed Catholic Church, and he was ordained as a priest known as Father Benedict.

He was preceded in death by his parents, Joseph and Frances Spinler; siblings, Rosalie Spinler, Lillian Beatty, Gilbert Spinler, and Ben Spinler.

Vic is survived by one sister-in-law; numerous nieces and nephews (Donald Beatty Jr.), Greg (Rosalie) Spinler of Hingham who served as his caretakers the past few years; and special friends, Kurt and Candy Johnson, for whom Vic worked for many years.