Frontier Conference basketball will be good 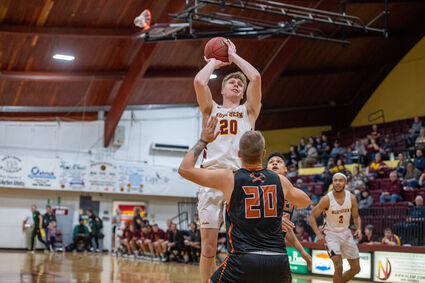 Montana State University-Northern's Jesse Keltner shoots over a Montana Tech defender during a 2022 Frontier Conference game last winter in Havre. The Frontier starts its full season this weekend, where teams play Thursday nights and Saturday afternoons. It all culminates with the 2023 Frontier Conference Tournament in Great Falls at the end of February.

The new year is here and with it, a new season of Frontier Conference men's and women's basketball. While league play officially started early in December with each team playing two games, this weekend marks the beginning of nothing but Frontier basketball for the next two months.

It should be an exciting winter in the Frontier as both leagues are loaded with nationally-ranked teams. Currently, three women's teams and two men's teams are ranked in the NAIA Top 25 as league play resumes.

It will also be exciting because there's a race to the new Frontier Tournament. For the first time in m...