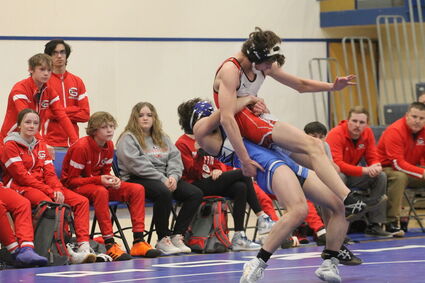 Havre's Justin Awtrey wrestles against Glasgow at Havre High Gymnasium on Tuesday night. In their dual against the Scotties, the HHS boy's team won, 38-30, and the HHS girl's team won 15-6.

On Tuesday night at Havre High Gymnasium, the Havre High wrestling teams kicked off the new year with a dual against Glasgow. At the beginning of a busy week for the Blue Ponies, both the HHS boy's and girl's teams won as the boys won their dual 38-30 and the girls won 15-6. In their first action of the new year, HHS head coach Beau LaSalle believed the Ponies were solid in their return to action.

"I thought we wrestled alright. Coming out of the break, we haven't gotten to wrestle anybody else so it was good to wrestle somebody else" LaSalle said. "We still got some things to work on but...