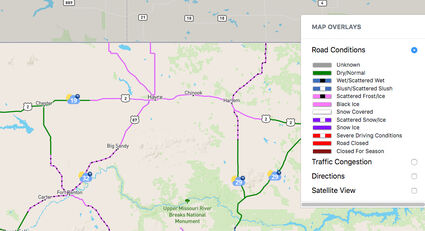 Havre Public Schools announced this morning that out-of-town school buses will not run this morning.

The announcement said the out-of-town buses will run this afternoon.

Chinook Public Schools announced on Facebook that school will start today on time for students who can make it.

No morning bus service will run in Chinook but buses will run in the afternoon for students who can make it to school.

“Take your time getting to school; it’s better to be a little late and in one piece than injured or in a ditch somewhere,” the post said. “Parents: use your best judgment. Stay safe Beeters!”

Box Elder Public Schools announced on Facebook that its schools will have a 9 a.m. start time and that buses are running at least an hour late.

National Weather Service issued a warning saying, “A brief period of freezing rain developed near the Havre vicinity early this morning, which can form a thin glaze of ice that can accumulate on any surface, including sidewalks and roads. Those traveling this morning should remain alert for changing conditions and are urged to slow down in anticipation of slippery roads.”

A special weather statement from Weather Service said the ice might stick around a while and create continued dangerous conditions.

“Reports from the area indicate side roads and sidewalks are especially slick in some locations, including in Havre, it said. “The icy glaze may linger for the next few days with temperatures expected to remain at or below freezing.”

Montana Department of Transportation's online road conditions map about 7 a.m. showed black ice on U.S. Highway 2 from about Hingham to east of Harlem by about Dodson and on U.S. Highway 87 from Big Sandy to Havre.

The map shows scattered frost and ice on many other routes including on U.S. Higwhay 87 from Big Sandy to south of Carter and on the southern portion of Montana Secondary Highway 223 between Chester and Fort Benton and Highway 241 north of Harlem and for 17 miles south of Fort Belknap Agency.