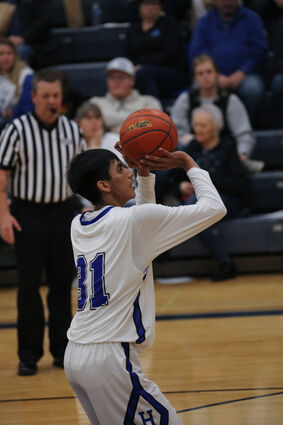 Over the weekend, Xavier Butler and the Havre High boys basketball team lost to Miles City and then defeated Hardin to move to 5-2 on the season.

Over the weekend, the Havre High boys basketball team demonstrated its growing pains as a team in a doubleheader at Havre High Gymnasium. On Friday, the Blue Ponies suffered a 56-49 loss to Miles City in a conference game. But Saturday, the Ponies responded and came back to defeat Hardin 66-62.

In their game Friday against Miles City, the Ponies started the game hot racing out to an 8-0 lead. Xavier Butler got started early with a pair of baskets in this stretch. But the Cowboys responded to cut the deficit to 10-8 to end the quarter.

Ed Brooks and Logan Muri scored a pair of baskets to...