Lights begin second half their season at Dickinson State 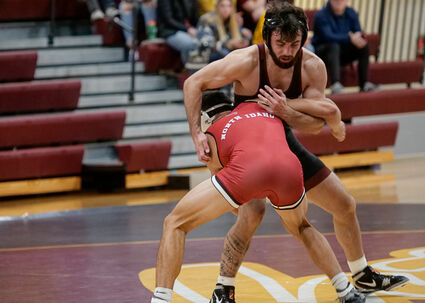 Martin Wilkie and the Montana State University-Northern wrestlers travel to Dickinson State Wednesday night for their first matches of 2023. The Lights have had the last 23 days off from competition.

After a grueling first half of December, the Montana State University-Northern wrestling team has had the last 23 days off from competition. But, the annual mid-season break is over, and now, its time for the Lights to return to work.

And the action starts Wednesday when Northern opens the 2023 portion of its schedule with a dual at Dickinson State. The Lights meet the unranked Blue Hawks Wednesday at 7 p.m.

The dual is the start of a busy stretch for the Lights, who also travel to the Missouri Valley Invitational and back to Dickinson for the Tyler Plummer Classic this month.

Northern comes into the new year led by standouts NaKoda Siegel and Martin Wilkie. Siegel is ranked No. 3 at 174 pounds, while Wilkie is ranked seventh at 149 pounds. Both have won individual titles this season, and both are national championship contenders as the postseason draws closer.

So far this season, the Lights are 5-2 in dual action, with the dual against the Blue Hawks being their only one in January. Northern then finally returns home for duals against Arizona Christian and Embry-Riddle Feb. 3 before getting their annual rematch with Providence Feb. 9 in Billings.

Wednesday’s dual between the Lights and Blue Hawks will be at 7 p.m. in Dickinson, North Dakota.