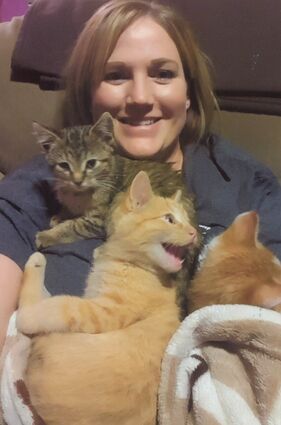 June 27, 1975, the biggest Dallas Cowboys fan entered the world at Sioux Valley Hospital in Sioux Falls, SD. After graduating from Shenandoah High School in 1994, Janelle lived in New York and Arizona before settling in Council Bluffs, where she met Justin Anderson. They were married August 21, 2004, in North Platte, Nebraska. Over the years, the couple moved from North Platte to Douglas, WY, then to Glendive, MT and finally on to Havre, MT.

Track meets, wrestling, baseball, and other school events of daughter Paige (2007) and son Wyatt (2010) is where you could find Janelle.  Books, teddy bears, and heart shaped rocks joined the Cowboy collection. Family, friends, and God were those held closest to her heart. Kindness, caring, and compassion were her ways of the world - never a complaint and always with a grateful heart.

Janelle was preceded in passing by her mother, Karen Koenders (2011); godchild, Michael McKinnon (2003); and grandparents, aunts, uncles, and cousins.

Janelle was a strong Breast Cancer Survivor before she went to see Jesus unexpectedly January 8, 2023.

Janelle's family has suggested memorial donations be made in her memory to the Paige and Wyatt Anderson Benefit Account in care of Stockman Bank, PO Box 1271, Havre, MT 59501.

Please visit Janelle's online memorial page to send a card or leave a message of condolence for her family at http://www.hollandbonine.com .