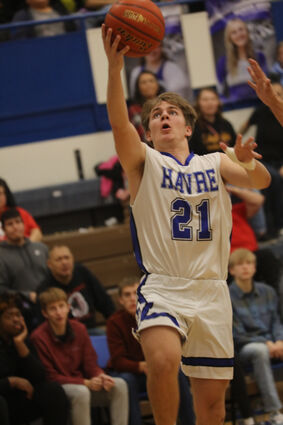 Havre's Crawford Terry goes for a layup against Browning at Havre High Gymnasium Saturday. Over the weekend, the Blue Ponies lost, 48-40, to Fairfield on road before defeating Browning, 77-69, at home.

With a young team on hand, the Havre High boys basketball team looked to continue growing this past weekend with games against Fairfield and Browning. The Blue Ponies showed their age on the road Friday night when they suffered a 48-40 loss to Fairfield. But the Ponies then showed what they are capable of when they defeated Browning, 77-69, at Havre High Gymnasium Saturday.

"This weekend had a lot of good learning for us. It was a tale of two games for us," HHS head coach Walynn Burgess said. "They're young kids but I enjoy being around them because they want to come to work every day and...