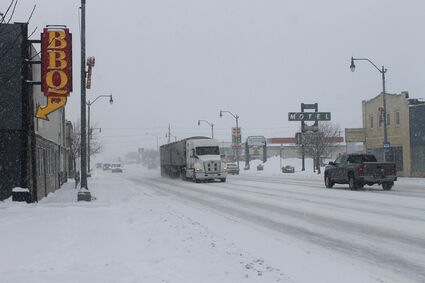 Vehicles drive this morning through falling snow on First Street in Havre. Snow has again blanketed the area, with Havre receiving more than 3 inches in the past two days and more snow predicted through tonight.

The return of cold and snow has continued poor driving conditions in the area, with highways in this regions listed as having snow and ice, even some black ice, and driving in towns still a problem in some areas despite work to remove snow and ice.

Havre Public Works is recommending that drivers in the area stick to the most well-traveled roads as much as possible amid the difficult driving conditions caused by recent weather.

After historic snowfall in December the area has seen some significant fluctuation in temperature that...