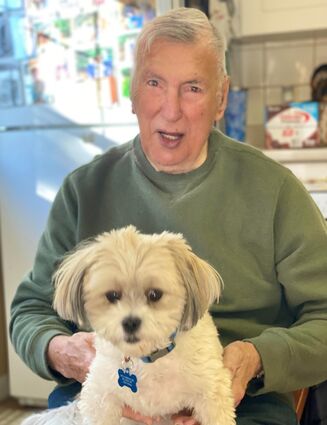 As a young man, he worked at the Helena brickyard for Archie Bray. He learned the flooring craft as a side job, and eventually moved to Great Falls to work for Central Flooring for five years. A chance meeting with Bill Fuglevand at a job site led to an offer to work for him in Havre. After moving to Havre, he bought Havre Floor Covering from Bill in 1957. John also owned several properties in Havre. Here he raised his two children, Timothy and Pamela.

John made many lasting relationships in Havre, including the love of his life, Marilyn. What started as an ordinary workday turned into laying carpet for his future wife of 33 years. Since the day they met, they were inseparable; some might call them soulmates.

John truly lived life to the fullest. Into his 80s he was still an active four-wheeler, motorcyclist, snowmobiler and excellent handyman. Many remember him as the "crazy guy" who inspired Shidu Basin, the area near Great Falls where he and his friends did lots of their riding. He did, however, experience more than a few extreme situations either in a snowbank, a sand dune or in the middle of the desert. In his last year of life, he was changing a tire in freezing cold temperatures two weeks before getting a pacemaker. Tim appropriately calls him his Superman.

John and Marilyn spent 25 years as snowbirds in Arizona. After living for 40 years in Havre, in 1999 they relocated to Billings, where they were surrounded by kids, grandkids, and dogs (all named Yahtzee).

John truly left this world with no regrets!

In lieu of flowers, memorials can be made to Shodair Children's Hospital, Helena, MT.

A celebration of life will be held this summer in Havre.