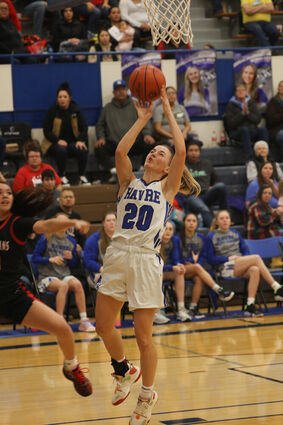 Avery Carlson and the Havre High girls basketball team will face conference foes Glendive and Sidney this weekend at home. The Blue Ponies will look to stay atop the Northeast A standings and remain undefeated in conference play.

The Havre High girls basketball team is back home at Havre High Gymnasium this weekend with a conference doubleheader. The Blue Ponies will host Glendive tonight and then Sidney Saturday as they look to remain undefeated in the Northeast A.

The Ponies start the doubleheader tonight with their game against Glendive. The Red Devils are currently last in the Northeast A with an 0-4 record in conference and they are 1-9 overall. While conference games are always tough, HHS head coach Dustin Kraske expects the Ponies to be prepared to start the weekend.

"I would expect our kids to continue to play well, play hard, play together and develop their fundamental skills," Kraske said.

This game will be a rematch of a game in Glendive last month. It was a strong night for the Ponies as they won 63-33. Codi Nagle led the Devils with 11 points in the loss.

The Ponies will wrap up the weekend with their game against Sidney Saturday at HHS Gymnasium. The Eagles are near the bottom of the Northeast A with a 1-3 conference record and a 2-6 overall record. However, Kraske expects the Eagles to play them tough just like in their first meeting this season.

"Sidney's got a nice team," Kraske said. "I thought they played us pretty well over there in Sidney. I liked how hard they played and that they handled our pressure decently well."

The Ponies and Eagles played each other in Sidney last month. The Eagles played well in the first half, but the Ponies pulled away in the second half to win 65-46. Savanna Anderson led the Eagles with 13 points in the loss.

The Ponies enter the weekend with a 6-4 record and look to improve on their 4-0 record in the Northeast A. The Ponies are still building their identity as a team, but Kraske believes they have grown since the last time they faced the Devils and the Eagles.

"We have more experience in games which will be helpful," Kraske said. "Kind of like everybody, we're working to determine now who we are as a team as we get into the second half of the year."

Amaya Jarvis will look to continue her strong start to the year as she is averaging 14.9 points a game. In their previous meetings, Jarvis scored 10 points against Glendive and then 17 points against Sidney.

"At the end of the game, we worked on understanding the situation and we'd like to continue to do that," Kraske said.