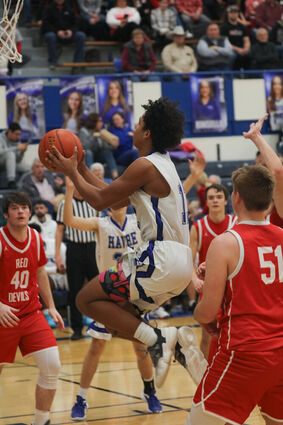 Havre's Tre Gary drives to the rim against Glendive at Havre High Gymnasium this past Friday. Over the weekend, the Havre High boys basketball team defeated Glendive, 43-41, and Sidney, 76-31, in a pair of conference games.

With a pair of conference games at Havre High Gymnasium this past weekend, the Havre High boys basketball team looked to improve their standing in the Northeast A. The Blue Ponies faced a challenge Friday but ultimately defeated Glendive, 43-41, and then rolled over Sidney for a 76-31 victory Saturday.

"There was just a lot of growth from us this weekend," HHS head coach Walynn Burgess said.

Carter Amsler capped off the quarter with a 3-pointer to give Glendive a 9-6 lead. Burgess believes both teams came out playing strong defense as both teams struggled to score in the first quarter.

"It was ugly. Nobody could put the ball in the hole and both teams were relying on their defense," Burgess said. "They came out in that 1-2-2 look and just gave us fits."

The Red Devils took some momentum as Amsler made a layup and Murphy knocked down a pair of free throws. Carter Spangler made a layup late in the half, but the Ponies trailed, 18-16, heading into halftime.

Coming out of the half, the Ponies grabbed momentum. Crawford Terry started the quarter with a free throw and Butler got rolling with a pair of buckets to give the Ponies a 21-18 lead. But the Devils responded with a 6-0 run to take a 24-21 lead halfway through the quarter.

"We were just playing tough defense and bringing that to our offense," Butler said. "Defense to offense. I think that's how we got going in the second half."

After Eaton knocked down a three, Butler scored again for the Ponies. After a pair of free throws from Riley Phipps, Keller knocked down a jump shot to give Havre a 35-29 lead heading to the fourth.

Looking to get back in the game, the Devils started the fourth with a pair of buckets to cut the deficit to 35-33. Butler responded with a free throw and a bucket to stretch the lead to 38-33. But the Ponies could not pull away.

Over the next few minutes, the Devils went on a 6-0 run to get back in the game. With just under three minutes left in the game, Glendive had a 39-38 lead. The lead was short lived however as Terry made a layup and one free throw to give Havre a 41-39 lead. The Devils responded with a layup from Eaton to tie the game, 41-41, with about a minute and a half left.

Over the next few possessions, both teams came up empty. It wasn't until the closing moments that someone was able to take control. With 10 seconds left on the clock, Butler drove to the basket and knocked down a floater to give Havre a 43-41 lead.

"I just had to find a bucket," Butler said about that possession. "I just drove baseline, hit a floater and made it."

The Devils' last shot of the game failed to go down and Butler grabbed the rebound as time expired. It was another strong game for Butler as he led the Ponies with 26 points on a night where the Ponies had trouble getting the offense going.

"People don't really realize how good that kid is and how much he does for our team," Burgess said about Butler. "If it's blocking shots, getting rebounds, finishing layups, hitting threes, he's overall just a great leader for us and we appreciate everything he does for us."

The Ponies had a bit of an easier time Saturday with their victory over the Sidney Eagles. The Ponies started the game on a 5-0 run with a bucket from Gary and then a three from Butler. After a Sidney free throw, Shane Patacsil scored to make it a 7-1 game.

Over the next few minutes, the Ponies and Eagles exchanged scores until Havre had a 14-10 lead late in the quarter. As the quarter came to a close, Patacsil knocked down a three from the corner to give Havre a 17-10 lead heading to the second.

The Ponies got hot to start the second quarter as they went on a 24-5 run. During this stretch of five and a half minutes, four different players knocked down a three, including Patacsil with a pair of threes during this stretch.

"The ball found the shooters and the shots went down and we just got hot there in the second quarter," Burgess said.

The Ponies continued to play well over the remainder of the half as they took a 49-17 lead into the mid-game break. Throughout the second half, the Ponies continued to pile it on as they stretched their lead to 40 points in the fourth to begin a running clock to close out the victory. Butler had another strong night for the Ponies with a game-high 20 points. Patacsil also played well with 17 points.

At the end of the weekend, the Ponies are now 8-4 this season with a 4-2 record in the Northeast A. The Ponies now only have a couple more weeks until the postseason begins. With little time remaining, Burgess believes the Ponies are continuing to get better.

The HHS boys basketball team will next play on the road against Malta this Tuesday at 6 p.m. 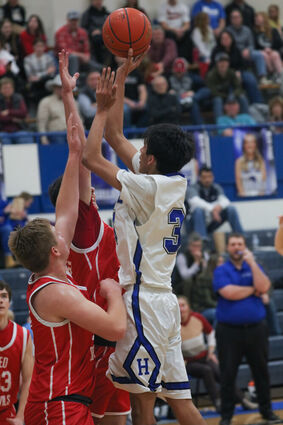