For Rocky Boy's Joe Standing Rock, basketball is everything 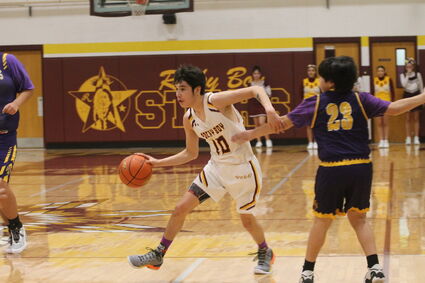 Rocky Boy's Joe Standing Rock dribbles the ball against Hays-Lodgepole last week. In his final season with the Morning Stars, Standing Rock hopes that his team can go on a run in the upcoming postseason.

As we approach the end of January, we get closer to the postseason for Hi-Line high school basketball. Over the next couple months, many players will play high school boys basketball for the last time, including Rocky Boy senior Joe Standing Rock. As his career with the Morning Stars soon comes to a close, Standing Rock just wants to enjoy his remaining time with his teammates on the court and in the locker room.

“I love my teammates,” Standing Rock said. “I bring them up and they bring me up.”

Basketball and family have always been connected for Standing Rock. He grew up in a basketball family, learning the game from his older brothers. As he competed against his brothers as well as other players, Standing Rock just fell more and more in love with the game.

“Ever since I touched the ball, it brought me happiness and everything,” Standing Rock said.

In Standing Rock’s final season with the team, the Stars are off to a 7-3 start this year. Standing Rock plays point guard for the Stars, so he is responsible for controlling the pace of the game.

“I tell where my team has to go and where to stay,” Standing Rock said. “When I’m driving, I like to bring in the defense and then kick it out to get (my teammates) points.”

Standing Rock only has a few more weeks left of the regular season before his final postseason with the Stars begin. As he heads into the final stretch of his high school career, Standing Rock looks forward to seeing what his team can accomplish before he leaves the program.

“We’re looking forward to seeing how far we can go and pushing ourselves to get up in districts and after districts, hopefully go to a championship,” Standing Rock said.

Once he is done with high school, Standing Rock hopes to continue playing basketball at the next level. Right now, he is looking at Montana State University-Northern to play collegiate basketball but he might do a year at Stone Child College before then.

Before heading off to college, Standing Rock hopes to end his tenure with the Stars on a positive note. Standing Rock and the Rocky Boy boys basketball team will next play this Thursday at home against Harlem. Before he got back on the court, Standing Rock answered five questions for the Havre Daily News.

HDN: As a senior, what is it like to be a leader on your team?

HDN: What was it like growing up in a basketball family?

Standing Rock: “Growing up in a basketball family is pretty fun. All we did was be competitive when I was playing my big brothers. That’s what got me mentally stronger and stronger as I grew up.”

HDN: What do you love the most about basketball?

Standing Rock: “The way I keep my head mentally and help my teammates do better. The fun thing is having fun out there and doing it for my tribe.”

HDN: What is your biggest motivator?

Standing Rock: “Mainly my teammates are my motivation and my coach. He’s the best coach you can have. Even though we’re all young, he’s young too as he’s in his first year coaching varsity.”

HDN: What have you learned from your time in the Rocky Boy basketball program?

Standing Rock: “Just being a leader which has bled into my school time. It makes me speak more. Since I’m antisocial, it brings more out of me.”