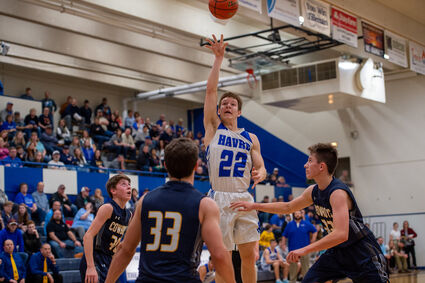 Havre senior Mason Rismon shoots over the Miles City defense during a Northeast A game last month in Havre. The Blue Ponies begin play at the Eastern A Divisional this afternoon when they take on Livingston at the Metra in Billings. Four berths in the Class A state tournament are on the line this weekend in Billings.

Since last season, the Havre High boys basketball team has flashed a lot of potential and improvement. Upsets against top teams and defending champs especially come to mind.

But the annual rigorous test for the Blue Ponies, who are eager to make a return to the Class A state tournament, starts today in the Eastern A Divisional tournament at the First Interstate Bank Arena at the Metra in Billings. The test Havre (11-7) will face first is Livingston's Park High Rangers (13-5) in the quarterfinals this afternoon at 3:30.

The former Central A opponent will bring about a big challenge for HH...