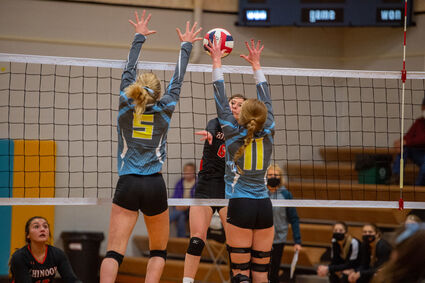 Chinook's Delaney Kellam, middle, tries to hit through the Chester-Joplin-Inverness block during a District 7C match last Tuesday in Chester.

Last week was a quiet one on the Hi-Line volleyball front. This coming week, however, won’t be.

That’s because this week marks the final week of the regular season for Class C and B volleyball teams, and then its on to district tournaments.

First, though, there were some key matches last week, though it was a short schedule due to MEA.

Last Tuesday saw Fort Benton defeat Geraldine-Highwood in a sweep by scores of 25-17, 25-20 and 26-24. The Longhorns remained unbeaten in the District 7C, as Abby Clark and Aspen Giese each had six kills in the win.

The Longhorns then took on Manhatte...