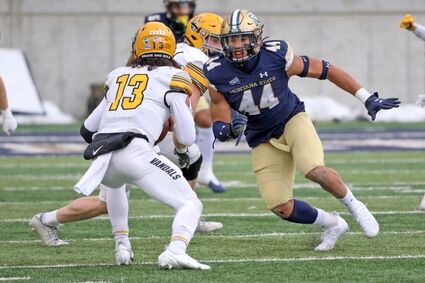 Montana State's Daniel Hardy, right, rushes the Idaho quarterback during Saturday's Big Sky Conference game at Bobcat Stadium in Bozeman. The Cats beat the Vandals on a last-minute drive to stay unbeaten in conference play, and will now head to Missoula to play the Montana Grizzlies in the 120th Brawl of the Wild.

FLAGSTAFF, ARIZ. — Every time you think Montana's defense has put together its best performance of the season, they find a new way to step their game up. The No. 9 Grizzlies put forth another massive effort in what has been an incredible season in a dominant 30-3 victory over Northern Arizona, allowing just 154 yards to the Lumberjacks while turning them over four times.

As a matter of fact, the final score was Montana's offense 16, Montana's defense 14 and Northern Arizona just three points.

"(Our defense) did a really great job today," Head Coach Bobby Hauck said. "It's comforting to...