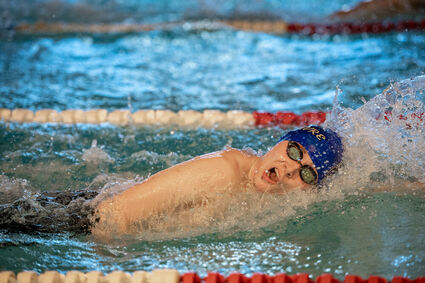 Hiram Cammon and the Havre High swim teams are back home to host the Class A Invite Saturday at the Havre Community Pool.

Many swim teams would like to be in the same position as the Havre High swim teams this month. Not only did the Blue Ponies get to stay at home to host a meet last weekend, but they will get to do it again when they host the Class A Invite this Saturday at Havre Community Pool.

While the Ponies are lucky to host back-to-back meets, they have faced their share of issues. Along with being short handed, the Ponies have had trouble with disqualifications the past few meets, so that has been a focus for HHS head coach Bill Kilgore this week.

"My expectation is a whole lot less disqualifications than we've had the last couple of meets," Kilgore said. "We've gone over the rules and different stroke techniques that have been an issue so that's my number one expectation."

The Ponies will face other Class A schools at the meet such as Billings Central, Hardin and East Helena. If the Ponies are going to compete, they will need their best swimmers to perform well.

Last week's meet was the Ponies' first since the winter break. While he was proud of how they swam, Kilgore did not believe they were back in shape for competition yet so that has been a focus for him this week.

"We've been working on that all week. We had a real good practice Wednesday night and I think the kids were pretty wiped out," Kilgore said. "It can be a little difficult trying to get the kids back into shape but we're better than we were last week."

Kilgore is more than happy to get to swim at home for the second consecutive weekend. Not only do his swimmers not have to travel, but he believes their 25-meter pool will give them an advantage compared to the 25-yard pools that most other schools are used to.

"We have a 25-meter pool and it kind of gives us a little bit of a psychological advantage because our kids are used to swimming in it," Kilgore said. "It's just a little bit longer than the 25-yard pools that everybody else swims in and in those first couple of races, when the opposing teams finish their race and look up at the clock, their time is way off from what they normally would be and it kind of throws them off."

With their competition coming from the Class A this weekend, the Ponies will get the chance to see the swimmers they will eventually face at state next month in Great Falls. While Kilgore will be focused on getting the best out of his team this weekend, he will also use it as an opportunity to begin planning for the postseason.

"It's going to give us a feel of the kind of lineup of where the other coaches think their strong points are and where their weaknesses are," Kilgore said. "We'll have to sit down and kind of examine that and see if we can exploit some weaknesses and get some points at state that we can steal away so it just gives us a chance to see their swimmers and know where they're at."

The Class A Invite will begin at 1 p.m. on Saturday at the Havre Community Pool. It's also senior day for the Ponies, and all seniors will be honored before the meet.