Billings here they come: So glad the All-Class State Tourney is back 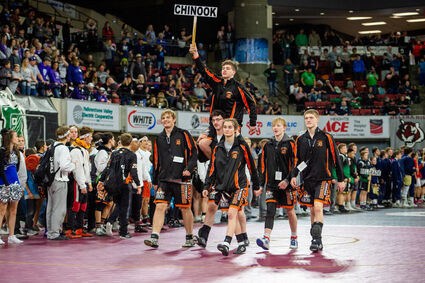 The Chinook Sugarbeeters march in the parade of athletes at the 2020 All-Class State Tournament in Billings. Last year's tournament was canceled due to the pandemic but returns to the Metra this weekend.

It may have only been gone for one year, but it seems like February of 2020 was so much longer ago.

For just the second time in three decades, there was no All-Class State Wrestling Tournament last year, as COVID-19 protocols changed the wrestling season in Montana a year ago.

Instead of the entire state convening at the Metra in Billings, all three classes held their own state tournaments at various sites around the state, and with limited fans. The tournaments were also held in March since wrestling season didn't begin until after Christmas break last year,

That meant that, the All-Class State Tournament was last held in 2020, literally a month before COVID-19 took hold in the Treasure State.

Of course, little did we know all the way back then that we would have to skip a year of the tourney and change our lives completely, and that in February of 2022, we would still be dealing with a pandemic unlike anything we've ever seen in our lifetimes.

Now however, as we continue to strive toward a sense of normalcy, something very normal, something we all love, and we all missed dearly is back - the All-Class State Tournament.

In my humble opinion, the state wrestling tournament is the single best high school sporting event in Montana. I love them all of course, and I coach two sports myself. And while I've covered some thrilling state basketball tournaments, exciting state football championship games, and so much more, there just isn't anything else like the All-Class State Tournament. It's unique, it's special, and it's one of a kind.

From the moment you walk into the Metra Friday morning, until the last photo-ops are done Saturday night, the state wrestling tournament is an intense, fun, exciting, emotional, 48-hour adrenaline rush. And it's something the Montana High School Association, and the city of Billings does such an incredible job of putting on.

And because it's so special, and so memorable, and so big, it's, in my opinion, not only the best high school sporting event held each year in the Treasure State. It's, again, in my humble opinion, the second-most important sporting even held in the state each year, with only the annual Cat-Griz game likely capturing more of Montana's attention. It's just a huge, huge event, with nearly every single town, from every corner of the state represented in some way, and when we didn't have it last year, it was sorely missed.

Of course, I'll be missing out on it again, as I have a very capable reporter and great photographer covering state wrestling, but I'll be watching. And while I don't get to go to Billings myself this weekend, I'm damn glad the All-Class State Tournament is back.

Because, high school wrestling, high school sports, Billings, and all of Montana just wasn't the same without it.