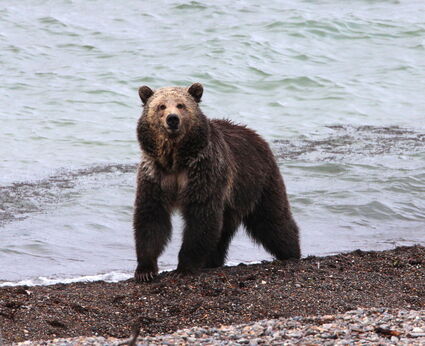 A grizzly bear is shown at Mary Bay along Yellowstone Lake in Yellowstone National Park. A new study says flaws in how the government measures Yellowstone's grizzly population raise questions about whether the animals have recovered sufficiently to merit lifting federal protections, according to a new study.

BILLINGS — Flaws in how the government measures Yellowstone's grizzly bear population raise questions about whether the animals have recovered sufficiently to merit lifting federal protections, according to a new study.

The study concludes that a major reason more bears have been counted in recent years is that more time is now spent counting bears. The authors argue that the region's bruin population could in fact be in decline, even as officials consider revoking the grizzly's threatened species status.

The peer-reviewed findings have been accepted for publication in the journal Conservation Letters. The work was partially funded by the Natural Resources Defense Council.

Population trends within Yellowstone's bear population have taken on added importance as the U.S. Fish and Wildlife Service considers lifting federal protections for the animals, possibly as early as next year.

Government biologists countered that there is no evidence of a decline. They said newly-revised population data shows more than 700 grizzlies living in and around Yellowstone National Park, an area that includes Wyoming, Montana and Idaho.

Meanwhile, rising numbers of bear-human conflicts — such as a mauling last week south of Cody, Wyo., that sent a man to the hospital with severe facial lacerations — have lent new urgency to calls to allow limited hunting to resume.

But the new study's lead author, University of Colorado environmental studies professor Daniel Doak, said shortcomings in the government's method of tracking grizzly numbers mean their recovery from widespread extermination last century may have been overstated.

The bears lost protections once, in 2007, before a federal judge ordered grizzlies back onto the threatened species list two years later. The reversal came in part over concerns that one food source for bears, the nuts from white bark pine trees, has grown increasingly scarce as insects kill large stands of the trees.

Doak said the loss of whitebark pine and a decline in another food source, cutthroat trout, may have pushed bears into areas where they are more likely to be seen during aerial surveys done by government agencies. That doesn't necessarily mean there are more bears.

"It's a pretty standard thing in all of wildlife biology and conservation biology that if you triple the amount of time you're looking for some rare species, it's likely you're going to seem more of them, just because you spend a lot more time doing so," he said.

They did not offer an alternative population size, nor say outright that the current estimate was wrong.

The government's latest estimate of 718 bears in the Yellowstone area is up from prior published estimates of roughly 600 bears.

That does not mean the bear population suddenly grew by about 100 bears. U.S. Geological Survey bear researcher Frank van Manen said the new figure results from revisions to the prior estimate based on increased survival rates for adult male bears in recent decades.

One reason more effort has gone into counting bears is that they are now spread across a much bigger landscape, said van Manen, who leads an interagency grizzly bear study team for the Yellowstone region. The results of those aerial surveys are corroborated by other factors, including the expansion of the animals' range and a trapping program that consistently identifies new bears, he said.