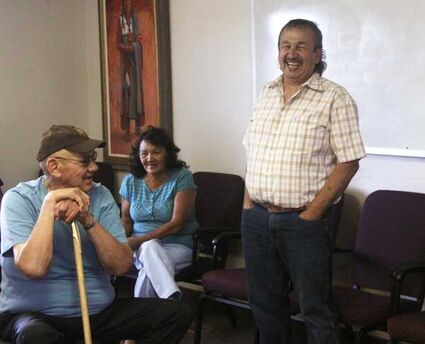 Ken Blatt St. Marks addresses some of his supporters at the Tribal Headquarters Tuesday morning. St. Marks recently was elected tribal chairman and seeks to be sworn into the position.

The election board meeting in Rocky Boy's Indian Reservation, which was to swear in Ken Blatt St. Marks Tuesday as a chairman for the Chippewa Cree Business Committee, was not held due to the absence of the board members.

According to St. Marks, the board decided to meet at an undisclosed location in order to avoid him and his supporters.

Originally, the meeting was to be held at the Chippewa Cree Tribal Court at 11 a.m. Tuesday, but the election board did not show, St. Marks said.

Election board members sent St. Marks a letter to tell him they would meet Aug. 12.

Board members said they had 14 days after the July 30 election to swear him in.

The letter reads, “The Election Board received a timely protest challenging the results of the Special Election for Chairmanship.”

Because of the protest, the swearing-in ceremony is being delayed.

“They’re doing everything they can to stall,” St. Marks said. “The people’s and my own civil rights are being stepped on.”

A press release on the Chippewa Cree Tribe website says, “A legal challenge has been filed protesting election results due to questions concerning voter qualifications. The protest also challenges the election board’s decision to allow Kenny Blatt St. Marks on the ballot while charges resulting in his expulsion were never adjudicated and are still pending.”

Foes challenged St. Marls’ right to be on the ballot, based on a 1966 tribal law that says people who have been removed from office may not run for two years. Tribal Court Judge Donna Running Wolf ruled that law was unconstitutional.

Rocky Boy police officers arrived at the tribal court to watch the group of people gathered at the office Tuesday to watch St. Marks be sworn in.

Glinda Eagleman of Rocky Boy said “I think they need to let what’s right go forth.”

Eagleman said she believes St. Marks will change things for the better and that he will address and pursue corruption within the Chippewa Cree government. She said the tribal council is acting in a way similar to a dictatorship by not allowing St. Marks to be sworn into the position.

“What can we accomplish when we’re divided like this?” Eagleman said.

It seems there is no limit to the corruption and dishonesty of tribal officials in Rocky Boy. The tribe is ill-served by these board members.

Wow!!! Sounds like reservation mafia at its worst. Never going to listen to the people?

Will anyone believe this council when they make the claim they 'listen to the people'? the people spoke TWICE. this council listens to their enablers only. As far as 'hollerin' at people, unfortunately, there are a group of people, mostly in positions of authority, who need someone to 'holler' at them. Thanks, Ken, keep it up

Spectator I dont think you have to be worried about that. It was beautiful real estate at one point now its littered with garbage, run down homes, cars in the ditch, some areas look like a land fill. Their is plenty of other beautiful real estate around the western part of the state that people would love to have before they even though about the reservation. As a white man looking at the Native Americans I feel terrible for the people out their and how their government has mistreated them.

Voters need to remember Rick Morsettes desperate and unethical tactics in the next election. He didn't fire employees who were federally charged for stealing millions of dollars, he says they are innocent until proven guilty. But claims Ken can't run because he was NEVER charged for allegations. He also said voters were not qualified because paper IDs were used to vote, the enrollment clerk ran out of laminating paper. Come on now! State of MT gives paper IDs until laminated ones are mailed.

As a Native American living in the white world I have learned & studied their ways. When I visit Rocky Boy looking through their eyes I see prime real estate. Beautiful land that has lots of potential to fill a greedy real estate agents pocket. With populations growing and available land becoming fewer I would be worried. You never know what the government will do.