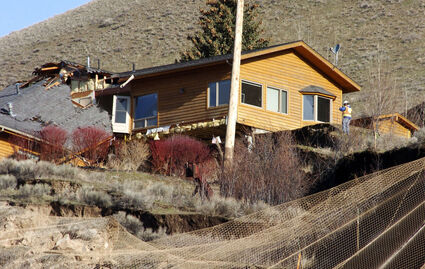 A worker inspects damage to a house at the top of a slow-motion landslide in Jackson, Wyo., on Saturday, April 19, 2014. No one can say when the mountainside collapsing into this Wyoming resort town will give way. But it appears increasingly likely that when it does, it's going to take a piece of Jackson with it.

JACKSON, Wyo. (AP) — What's happening in this Wyoming resort town might be better described as a land creep than a landslide, but the lack of speed has not hindered the sheer power of the moving earth.

Over the past two weeks, a piece of East Gros Ventre Butte has slowly collapsed toward the west side of Jackson — shearing one hillside home in half, threatening to devour several others and looming ever more ominously over a cluster of businesses below.

No one can say precisely when the mountainside will cease its slow droop into Jackson or finally give way. But it appears increasingly likely that it's going to take a piece of Jackson with it.

Emergency workers have tried in vain to shore up slow-moving slope, attracting a steady parade of the curious and camera-wielding gawkers.

"We don't know what Mother Nature wants to do here. She's shown us quite a bit," Jackson Fire Chief Willy Watsabaugh said as he stood at the edge of the slide zone, its rocky slope rising sharply behind him.