Tadios embezzlement trial to start today, both may have to testify 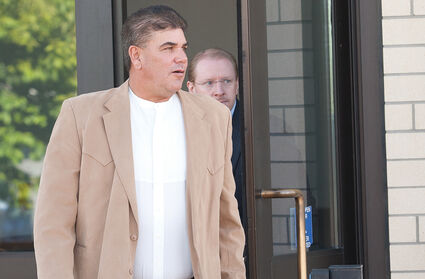 Bruce Harold Sunchild, 69, a former chair of the Chippewa Cree Tribe's Business Committee, was arrested Tuesday after he failed to appear at the arraignment. His arraignment then was reset for 3 p.m. Tuesday.

John "Chance" Houle, a member and former chair of that council, pleaded not guilty to all charges in three cases Tuesday morning, one day before the start of a separate embezzlement trial in which he and Sunchild may have to testify.

The indictment against Sunchild and two against Houle have yet to be unsealed. The names of defendants and the indictments against them are not released until they make their initial court appearance.

Houle's attorney, Jason Holden, told the Havre Daily News after the hearing that his client would not comment on the case.

Holden told U.S. Magistrate Judge Keith Strong during the hearing that, as he did when previous charges were pending, Houle would voluntarily suspend himself from the tribal council.

The embezzlement trial of the former head of Rocky Boy's health department, Fawn Tadios, is scheduled to start today in federal court in Great Falls, although she again has filed complaints against her court-appointed attorney and objections to the trial starting. Those documents are not open to the public.

Parker was serving a 16-month sentence in a federal prison camp at Yankton for embezzling from the tribe. He resigned as council chair May 23, 2011, one day before pleading guilty in federal court in Great Falls to the embezzlement charge.

The brief says that Houle and Sunchild have been subpoenaed in the Tadios trial, but may be unwilling to testify for the defense or prosecution, as both were, at that time, under investigation on allegations of corruption.

Sunchild, who was vice chair of the business committee under Parker, took over as chair once Parker resigned. Sunchild lost the 2012 election to keep his seat.

Houle was among the first group of people indicted, in April 2013, on charges stemming from Guardians Project investigations at Rocky Boy. The charges against Houle were dismissed in that case in September 2013. All other people charged in the case have pleaded guilty in that or related cases or are facing new related federal charges. Some of the new charges against Houle appear to be related to that case.

In the three cases involving Houle at Tuesday's arraignment, the indictment was unsealed in one where he is the sole defendant. The indictments in the other cases remain sealed until his co-defendant or co-defendants appear in court, but the charges against Houle in those cases have been revealed.

In the first case, Houle, who also was a member of the tribally owned Chippewa Cree Construction Corp. and health care system board of directors, is charged with bribery of an official of an Indian tribal government receiving federal funding and with obstruction of justice by manufacturing false evidence.

The indictment alleges Houle helped award Chippewa Cree Construction Corp. subcontracts to Hunter Burns Construction, in which Havre psychologist James Howard Eastlick Jr. was a partner at the time, and he accepted $306,987 in payment from the company and Eastlick, accepting the money directly or through other parties. It also alleges he falsified a loan document in January of last year during the federal investigation and backdated it to 2010 to legitimize payments received from Eastlick.

Tony Belcourt, a former tribal council chair and former state legislator and CEO of Chippewa Cree Construction at the time of the alleged incidents, and his wife, Hailey Belcourt, have pleaded guilty and are awaiting sentencing in August.

A document in another case says a tribal council member, not named in that document, helped create the Hunter Burns Construction partnership with the intent of taking Eastlick's place and continuing to obtain federal money through the business if he lost his position on the council.

Eastlick and his partner, Hunter Burns, both have pleaded guilty in other related cases.

In the other sealed indictment, Houle is charged with conspiracy to defraud the United States; embezzlement from Indian tribal organizations; larceny within a special maritime jurisdiction; destruction, alteration or fabrication of records during a federal investigation; and influencing or injuring an officer, juror or witness.

The Associated Press obtained information that Houle is accused of embezzling tens of thousands of dollars from a bank account for the Chippewa Cree Rodeo Association, which prosecutors said had deposits of $2 million between 2009 and 2012 from rodeo events and contributions from tribes and businesses.

Houle and another tribal member disguised the payments to look like legitimate rodeo expenses, prosecutors said. He received cash and to buy a vehicle for his daughter, the indictment said.

Houle also used an intermediary to transfer money from the rodeo account to Hailey Belcourt to pay for a home in Box Elder, prosecutors said.

Houle is charged with fabricating documents to make the transfers appear legitimate once they learned of the federal investigation.

Tammy and James Howard Eastlick Sr. of Laurel, Eastlick Jr.'s sister and father, have pleaded guilty to charges alleging they embezzled money and paid money back to the Belcourts. The money was used to purchase the Box Elder house and for Tony Belcourt to buy a majority interest in MT Waterworks of Billings, which then contracted with the Chippewa Cree Construction Corp. in a project to build a regional water system.

The Associated Press obtained information that prosecutors said Sunchild and Tony Belcourt authorized $300,000 in payments to a consulting company owned by Havre businessman and former Havre school board chair Shad Huston. In return, Huston bought a sport utility vehicle for about $25,000 in 2011, and the vehicle's title was transferred to Sunchild's daughter, prosecutors said.

The next year, Sunchild authorized the payment of $27,200 to another Huston business and received $15,000 in return, prosecutors said.

Huston is scheduled to change his plea Monday.

Kev, Do you have statements that back up your claim that tribes have been repaid back 10X for land, resources, etc., stolen thru broken treaties? More lies your history books didn't tell you.

Kev, do you how much money the two reservations nearest Havre contribute to the economy of Havre? Havre pays but a pittance of the return it receives on its tax dollars. Havre benefits immensely from money spent by the people of Rocky Boy and Ft. Belknap. The debt to the American Indian will never be paid back. Take a moment to think of the money made off of stolen lands every year---it has to add up to trillions and then you might rethink your suggestion that we have been repaid.

Wake up folks before you lose all your rights.

All this thievery occurred under the auspices of the Chippewa Cree Construction Corp. Board of Directors. It would behoove the community to know the identity of the entire Board who allowed this to happen. They should be barred from serving on any tribal governing board, effective immediately. The Constitution assigns the role of Tribal Treasurer to safeguard all tribal funds. This was a catastrophic oversight and changes are needed.

Does anyone know if the feds were able to get back any of the tribal grant money? If so, how much? I don't recall reading any information in the articles.

There is a reason people with criminal backgrounds are not allowed to serve or run for office in the public sector off the reservation. It is time to re-visit the tribal codes, which were revised to allow people with a felony record to run for council. There are plenty of qualified people who would serve in an honorable way, without the baggage of a criminal mentality, which is the current situation on the REZ.!!!!!!

these individuals do not make checks themselves when they deal with tribal programs. we have a constitutionally directed position, tribal secretary/treasurer, including overstaffed finance departments at all of these entities. where were they? do they question things? are they more interested in keeping their jobs than proper financial management and oversight? this does not end if these folks get convicted, we as a community need to look at who processes those checks.